Recently, I’ve been getting tons of requests in my Custom Legendary Deltas page. I didn’t want that page to just be full of requests, so if you have a request for a Delta, please post it here. Any Delta Legendary requests will still be posted in Custom Legendary Deltas in addition to this page, but this way, people can request more than just Legendary or Mythical Delta Pokemon. No, I will not move old sprite artwork here, but any unfinished requests will be posted here.

I will not reply to posts unless I am posting a request, as I try to save space for sprites. Don’t worry if you don’t get a response, I check this page regularly, so most likely I have seen your request and am working on it.

Update: This page is dead. Sorry. It’s being continued on the Delta Sprite Request Dropbox continued page by @EnviousRage12 and the Another delta dropbox page by @Smores (sorry for the mention but I felt it was necessary).

Could you make a bug/dark delta Tyranitar?

@1ron3illager52, here’s your Delta Tyranitar. Hope you like it; It was harder than you’d think to make. Constructive criticism is always welcome.

Delta Tyranitar
Vicious Pokemon
Bug-Dark
Abilities: Swarm and Tough Claws (HA)
“This mindless Pokemon is the result of numerous experiments conducted by Perfection. It flies through the air and attacks its opponents from above, using a combination of talons, teeth, and straight up brutality to overwhelm them.”

looks a bit like delta kabuto/tops, but overall great work! Could you make a Ghost-Steel Yveltal?

@TheNerd, how does this look? If you have any suggestions, I’m willing to redo it. 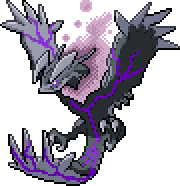 Delta Yveltal
Sealed Pokemon
Ghost-Steel
Ability: Spirit Call
“To contain its devastating power, this Yveltal was placed in a special armor. Every battle it fights in weakens the seal more, and eventually, its uncontrollable power will engulf the world.”

Your stuff looks really good. What about a Flying/Ground Eelektross? 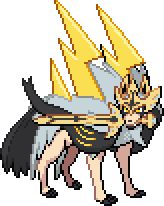 Delta Zacian
Thunderbolt Pokemon
Electric-Steel
Abilities: Motor Drive and Surge Surfer (HA)
“This Pokemon is the friendly rival of Raikou. It moves as fast as lightning, attacking thousands of times in a single second.”
@Tronsonic, I’ll get to work on the Eelektross now.

Delta Eelektross
Uraeus* Pokemon
Flying-Ground
Abilities: Sand Veil, Sand Stream, and Sand Spit (HA)
“Eelektross flies around in sandstorms, urging them on with the flap of its wings. It hunts alongside Sandaconda, splitting the spoils between them.”

*A Uraeus was a winged serpent monster in Egyptian myth.

@Firefiber733339, I just completed the Zamazenta. 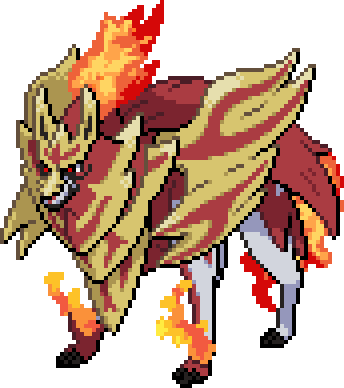 Delta Zamazenta
Volcano Pokemon
Fire-Steel
Abilities: Flash Fire and Blaze Boost (HA)
“It lives near volcanoes, keeping them dormant and holding them back from erupting. Zamazenta absorbs the heat and fire from those volcanoes, which it then uses in battle.”

Would a Dark/Dragon Necrozma be at all possible to work with? Was gonna request a Fire/Dragon Infernape but I couldn’t think of any particular way to make that work.

would you be willing to make a delta rotom? any typing would be cool, but preferably dark or fairy

@Zarono, I ended up doing the Fire-Dragon Infernape. I figured that the Necrozma would end up just looking like a recolor, but if I can come up with an idea for it, I will make it. But for now, I figured something was better than nothing, so I hope you like it.

Delta Infernape
Drake Pokemon
Fire-Dragon
Abilities: Drought, Flash Fire, and Tough Claws (HA)
“The pads on its shoulders and knees are actually flame sacks filled with fire reaching 3,000ºF. Its powerful wings enable it to fly at speeds rivaling Latios.”
@Raf, I will begin work on a Fire-Dark Rotom, if that typing is alright with you.

That is funny cause Purugly is faster that Latios!

@Raf, I just finished the Delta Rotom. If you have suggestions for alternate forms, I’ll post them here too. As usual, feedback and suggestions are appreciated.

Delta Rotom
Anti-Plasma Pokemon
Fire-Dark
Abilities: Flame Body, Prankster, and Disruptive* (HA)
“It accidentally possessed a machine at the same time it blew up, resulting in its ability to make any technology it goes near immediately catch flame. It retained its mischievous nature, and loves to use its new powers to play pranks.”
Hope you like it.

*Disruptive sets up a permanent Magic Room and Embargo on every other Pokemon, but vanishes once this Pokemon leaves the battlefield. Also affects allies.

If you can, can you create a D.Typhlosion as a Grass, Ice type?
If you can’t, just any type is ok.

Your sprite work is super clean! Could you do a fairy/fire Ho-oh? Or any other type that works, these are really interesting!