So while i was searching for something in the graphic folder of the game i found this back sprite for a female character shirt and it seems strange since it got a weird name: Shirt_HoL instead of being labelled with numbers.
I looked it up and it seems like a fan-made sprite from this forum (Heirs of Legend) that somehow is included in the main game when i downloaded it. I really like the outfit but i can’t find it in game, its not in the shop and the rest of the sprite are also missing (the running, the riding bike sprite as well as the front) so yeah if anyone can provide me with the rest of the sprite as well as how to obtain it in game then I would appreciate it alot. If not just the sprite is okay since i can just replace it with another outfit. Heres the sprite that i found in the game file: 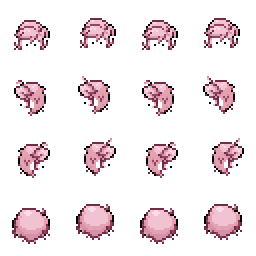 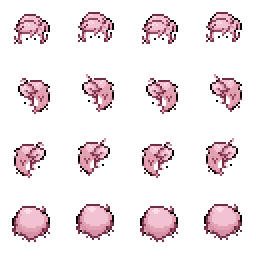 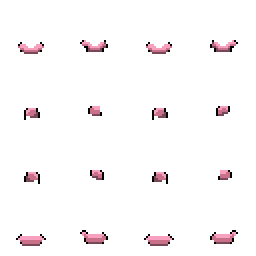 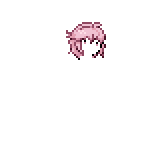 i found this in the game files too!
both for running and walking animations and every other sprite that was included in that post. So likley one of the devs installed this mod just for fun and they copied the game to others. OR that mod was going to be officaly implemented into the game. Intresting to still see more cut content being found. So your best bet is to rename these files to match the defaults, Sadly there is no male version.
1 Like
Lotus March 29, 2022, 2:18pm #3

Well the animations for running that u found is actually the normal pink shirt not the one i’m looking for sadly…
The one in the original post is mainly black with pink stripe which fits the hair better since the pure pink shirt add too much pink color to the character who already has pink hair, like this one: 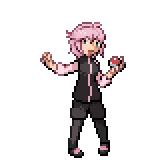 Its a bummer but i think imma commission another request for this animation to be remade as well as the front sprite that shows on the trainer card. Anyways thanks for replying so that i know this isn’t a bug that only i have!
And also how is your Kalos Re-Sprite Mod? I liked it alot but i heard its not entirely finished yet so looking forward to it! ^^

And since i will ask for it sooner or later might as well do it here. To anyone who thinks they can remake this sprite for me (the running, bike, front, etc…) then imma offer this to that person: 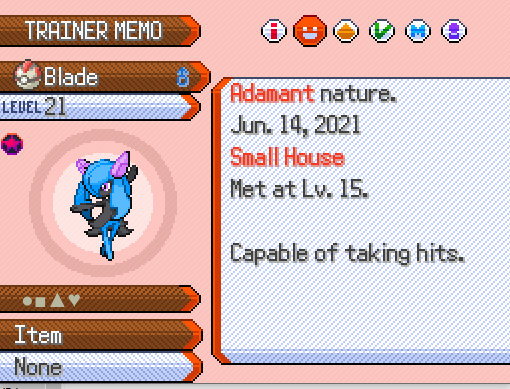 Yeah I’m lazy lol. I’ll get to finish it around 3st April I’ll see. it will be released somewhere around April.

Hi, I’m the original creator of this outfit. I am not active in the insurgence community whatsoever anymore, but I received an email about this post for some reason? So I figured I’d say something.

I deleted the folders for the old outfits because the original links died, and my google drive updated to match my new gmail which has my full name, so I wasn’t comfortable with all the folder access request I started receiving a few months ago. But I still have the original files saved to my computer.

Give me til the end of the day and I’ll find somewhere to save and share the files to if you really want them that badly.

This is a genuine question– as both the creator of these sprite options, and as someone who hasn’t touched insurgence in 3-4(?) years– is this hairstyle no longer available in the game? Because when 2.0 first came out, the devs added my hair (with permission) as a customizable option.

I understand I’m not the best sprite artist, and it wasn’t perfect, but I was really happy and proud about its inclusion in the game. So it makes me a little sad if it’s since been removed…

Alright, I’ve updated the link in my original post to a new folder. As well as the alternate hair color options for the hair style.
It’s the exact same outfit as the one that was posted years ago, no alterations, and I have no clue about the current state of the game, so if it doesn’t match up with the current sprites in any way that isn’t on me.

While I was at it, I also decided to post my updated nuzlocke outfit from my personal file from when 2.0 first came out. Because I’ll be honest, I dislike the old version I first posted here, and I think that the newer one that I never posted is much better.

. But Welcome Back! Nonetheless and sorry for troubling you (all the notifications and stuff, didn’t think you would get notified )
As for your question yes your hair style are still included in the game which is a good thing along with all the original recolor of it and the sprite are still useable in game as the sprite size are still the same since 2.0.
Thanks for taking your time to put back the outfit and included a NEW one as well I love it ^^ and imma be using both since why not

Its a shame u don’t play Insurgence anymore since i still wanna give this Kirlia away… Maybe i will do a random giveaway if u don’t want it?

It’s been in the games files for quite some time I just checked previous versions and yeah.

Um so I just checked the link for the First outfit (the original one) but i only find the sprite for the hair which are already included in the game and not the shirt (the one that i wanted) any chance u selected the wrong folder? Sorry for troubling you so much…

Oops, dunno how that happened. It should have the correct link now

And also, dw about the necroing. I’d rather help than have you commission someone to remake something that I still have the files for, haha.

Alright thanks alot! Ur the best <3