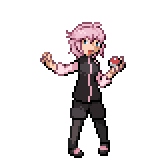 I do not take full credit for this outfit, as the original character design was heavily influenced by this post.

Nice job as usual… Waiting for Heirs of Legend, now two things waiting for along with 1.2

Oh, I saw your cover on Twitter! I really love your art!

guys what is the ID of the Girl Shirt and Pants in the Clothes ?

I think yiu can replace it with anything? Ima try too cuz this is EPIC

Thank you! <3 and no, it just comes in one color. If you want it in a different non-pink color you will have to go into photoshop, gimp, or whatever non-ms.paint photo editing program you have, and change it yourself.

Nice one! Really makes me want to make a complete custom character for this too. :3 Welp, time to do just that

heya, so i replaced the relevant file names with this hair, but nothing seems to have changed in the game. did i do something wrong? (tried to replace the purple default hair with white hair).

any help would be appreciated

edit: sorry, i realise this is technically a necro but this is the only relevant forum for it

well if you’re just starting the game, and you’re basing this off of the fact that the preview character has the default purple hair, this is because there’s a pre-existing image of the characters in their default outfits. If you get into the gameplay then it should show your character with the white hair provided you did everything correctly.

if that isn’t the case then it’s possible you might not have named the files correctly, even capitalizing something can mess it up.

heya, i managed to fix it later (accidentally put the run hair in the walk hair, but managed to fix that too). my pokemon insurgence installation has two sets of the character sprites for some reason, but i had to replace both for it to work instead of just the one, aha