Okay because the majority said so i soft reset and immediately get out of the gym and start grinding on wild pokemon because i already smacked all the trainers. I also go to the egg guy that speeds up the process or something and my egg still has about 30000 more steps to go. (it better be good tho) I smack my money on his face and… 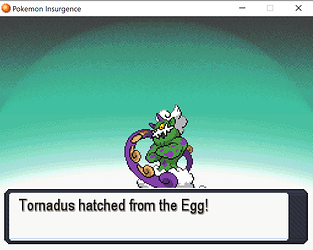 so lucky u know thats an uber mon right?

(yeah but it also makes it less fun when I use legendaries. it has prankster)
I lead off with Gusty because I taught him U turn and Xavier leads with a delta dodrio. I use U turn and send out Croc who was supposed to use bite but then fell asleep for two turns due to Hypnosis, but managed to kill it the next turn after it set up light screen. He sends out an emolga and Sparks kills it with two Wild Charges. Snorlax is left and I use Aera who uses aura sphere (i forgot about the light screen) and then sky attack. Snorlax flinches and I use Sky Attack again, but Snorlax crits body slam and Aera dies. (guess I’m using Gusty)

Guardian extreme speeds Snorlax and Xavier sends out pidgeotto and guardian uses extreme speed and bite. Delta Frosslass is next and Xavier mega evolves it and uses fire spin and will o wisp. I use bite but it outspeeds me and uses charm. I hit two dragon breaths, getting it in the red before Guardian goes down. Croc finishes off Frosslass but it will o wisps him. His last pokemon is Togepi, and I use ice fang before switching to Gusty. I misclick(well you don’t actually click but use space and enter but anyways) and use u turn. I send out Fruity and a poison jab finishes off the Togepi.

Xavier gives me Dive, calling it “venoshock” and I heal up my pokemon and box Aera and Guardian, bringing Volcano and Bagel to the team.

RIP my starter. The choices were Octillery, Volbeat, and Togekiss.

((also I’m adding a rule that says I can’t use any items in battle because I realized I wasn’t using any items and thought why not make that permeate?)

glances at the level 12 Numel and level 20 Bagon
So I grinded on wild pokemon for a long time and Volcano evolved into Camerupt and Bagel evolved into Shelgon. I head over to the dump because my friend is in danger or something and I can’t just sacrifice him and not care.

My Vipik City Dump encounter was a spoink, but bagel hit it a little too hard and it died. I beat up the cultists and then tried to rescue Damian. I finished the double battle and got the shaymin DNA.

My encounter for the Crossroads was a Delta plusle, and after it teeter danced me and burned me I finally caught it. Teeter. Heading over to the Mist Islands, I caught a Poliwhirl and imedietly after i caught it I encountered a Girantina. Yup totally didn’t want that instead.

I went left to Koril town, where I just healed up my pokemon and joined the scientist club or something idk. The Kabotops was an electross but it turns out sparks is ruthless and just straight up crit twice in a row.

I head over to Koril desert where not a single encounter is found and in the cave I find a double battle with a gabite and bayleaf. Correction: Only Gabite now. Wait what- So Fruity crit on poison jab, but left it on a sliver of health, BUT THEN POISONED IT- So I guess no Gabite. I head out onto the desert and encounter an Alakazam, and then it hit me down to LITERALLY ONE HP but then Fruity was like “Nope not dying” and killed the Alakazam, ending the battle and not taking any sandstorm damage.

I healed up and went back to the cave with the stone statues (yup totally statues) and caught a dewott. Hello Dewdrop. NOW GET IN THE BOX- The delta pidgey was actually a delta driftblim (i say it counts- it’s a static encounter) and I caught Balloon.

Back to the desert, some cultists stole a scroll and then killed a family- Yup totally not suspicious- and I got surprised by Damian who wanted to battle. He leaded with a delta roserade, and um…I’m underleveled for this. 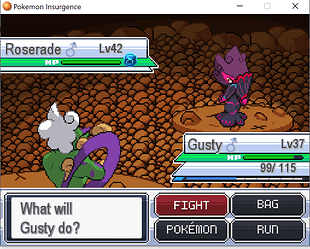 oops1028×829 44.1 KB
Oh well, here goes nothing. I use U Turn because nope gusty’s not going to die today and swap for Fruity which poison jabs it. He sends out goomy and bagel outspeeds it even though it is literally 7 levels higher, Good job Bagel.

He sends out delta gorebyss and I sent out Sparks, realized it’s a delta, and swapped for Fruity, who got a poison jab off but was going to get killed if she got hit by another moonblast. I swap again for Volcano who didn’t take moonblast so well either, and found myself in a problem.

I swapped croc who ice fanged it and realized I probably should’ve done that from the start. I get a crunch on his mismagious which psywaved me and did basically nothing, BUT THEN THE SECOND TIME IT GOT A CRIT- AND CROC DIED-

I sent out bagel to crunch it to death, and he sent out a buizel and Sparks came out. One good crit thunderbolt on that insanely overleveled waterdog and I won. Now to not get mauled by wild pokemon/trainers as I desperately try to heal.

I made it to Roggan town and started gambling because I need an encounter here and get just enough for an abra, and got an eelelktrik named Eel. I mean, not the worst…now to route 6! I got a Kecleon…nearly but then due to the type swap I thought it could live, but it didn’t…oh well. I soon realized the level didn’t drop, and I was going to go into every battle with a very underlevled team.

While grinding up Dewdrop (the dewott replacement for Crocs) evolved and I headed over to Helios city, and while exporing the sewers, I got a cameruptite which was fantastic for Volcano. I made a deal with the perfection cult and Taen leads with a delta magby, and Sparks was able to thunderbolt it. He sends out garbodor next and Volcano gets an earth power off but it used toxic, then he switches to shuckle.

I get off a flamethrower with a burn, but toxic hurts a lot so I switch into Gusty, which kills the shuckle. He sends his garbodor back out and Gusty uses extrasensory, and his last pokemon is a mega delta loppuny which missed twice and allowed gusty to use extrasensory again to knock it out.

East led with an ambipom, and Gusty used revenge, getting it in the red. East healed it and two more revenges later, it died but gusty was sitting at a not so chill 20 hp. Tepig was next, and dewdrop used aqua jet. It used roar, bringing out Sparks, but thunderbolt was enough to kill it. East sent out sunkern, and Volcano just flamethrowered it, as well as East’s mega scizor, which strangely did swords dance instead of attacking, but sure. His next pokemon was roselia, which got off a toxic, but Volcano just flamethrowered it too. Fraxure was is last pokemon, and Sparks used fairy move (my custom move named “Fairy Move”) and after a few turns, we won.

Jaern sent out “rayquaza” but it really was just an escavalier…so Volcano just killed it in one shot. I mean, it was 7 levels higher, but like…it’s quad weak to fire. Damian “saved” me, even though I could probably take on that bug a thousand times, but yeah. I got my gym badge and I start grinding up because- well being underleveled sucks.

I went into the misty/steamy cave and caught a delta pikachu I named Aera Mini because it had the same typing and I was still mad about Aera dying. I finish the cave and emerge in Utira Town. I decide to battle nora and she leads with a machop, and I use gusty to make quick work of it. She sends out a Glalie next, and Volcano mega evolves and kills it with Flamethrower, but took some damage from a crit Frost Breath. Khangaskan is next and…this happens. 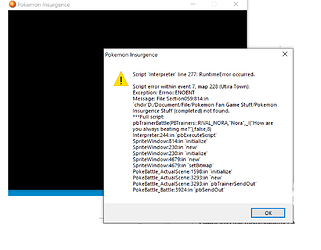 I battle daimian this time but at the end right after I deafeat his last pokemon, slowbro, it pops up again. 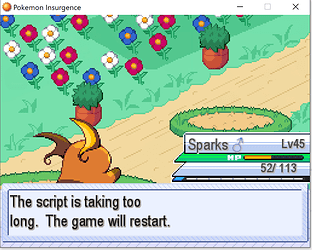