So my original save file that I beat the game with (and has lots of shinies) is gone forever, so I decided to start a new save file that’s a randomizer Nuzlocke. I already did part of it (only up to route 2) but I decided to record the rest.

Long story short, my starter was a Togekiss I named Aera, caught an unfeazent named Feathers, got a delta crustle (berry) I named Fruity in the cave, Feathers died to a very scary steelix that was rollouting, killed some cultists, found a tentacruel in route one but crit it, looking at you Aera went to Midna Town, found a delta Arcanine in the cave i named Guardian, beat up all the schoolkids, and almost got a registeel on route two but ran out of pokeballs.

This is my team so far.

So my original save file that I beat the game with (and has lots of shinies) is gone forever,

I kinda just opened the game and it wasn’t there.
This picture is my only proof that it actually happened 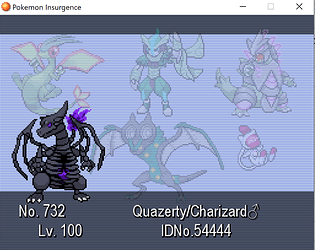 I went over to the Midna Garden (the dark cave encounter was abra and it just fled) and tried my luck on the secret Grotto (it failed) and I got some berries, so I tried fishing and got a Charizard with Leftovers. It was painful, and nearly killed guardian and Aera, and then Aera killed it. I don’t like Leftovers anymore.

I also talked around with some people in Midna town and one wants to trade A FRIGGIN MEOLETA for any ground type. So yeah, totally fair trade there.

I started going across route 2 and Fruity finally learned a poison type move (sludge) and it turns out Roar acts as a repel for 50 steps (so I guess I’m keeping that). Some cultists are marching off to a temple or something so I just beat them up and steal all the items.

My temple encounter was a Raichu I named Sparks and I proceeded to try to train it up on the rest of the trainers on route 2 before heading over to cyan cave. It was all going good until a trainer whipped out a delta venusaur which nearly killed both Guardian and Fruity, so I pulled out my probably overleveled Togekiss and killed it. After my Roar-repel wore off, I got a Feraligator as a encounter.
Any help for nicknames? 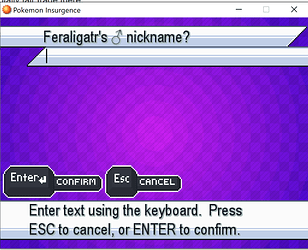 Headed up to Suntouched City where I tried to find an Axew or something for TV. It was actually a Bagon, and I took it as my encounter. I’m pretty sure it’s under the category of static encounter anyways. After eating up 17 pokeballs, Bagel the Bagon joined the team, and I was ready to face Orion. …is what I thought until I realized I was underleveled a bit when a little girl nearly killed sparks and Aera.

I didn’t learn my lesson and just beat all of the other trainers, healed up, and then hoped for the best as I challenged Orion.

Orion sent in a delta meditite which only used work up, and Crocs finished it off rather quick. He then used Magnezone which I Flamethrowered with Aera (I got the tm a while back). Empoleon came out next, and I used thunderbolt via Sparks, and I managed to kill it even though it was 4 levels above me. Good job Sparks. For his last pokemon he sent out a delta dodrio and I sent out bagel, who nearly got oneshot by it’s psybeam. I switched into Aera, and used air slash twice to finish it off, and just like that, I got my first gym badge, despite being around 3-4 levels lower.

BUT WAIT! I heal my pokemon and go straight back up to the gym where I’m supposed to fight Taen while he rambles on about cult stuff and legendaries and oh the rock was reshiram and now it’s gone and now it’s back. With all that stuff done, I get my new encounter on the suntouched exitway and it’s a delta ditto. After eating up more of my pokeballs, I finally captured Dee Dee, and welcomed it to the team.

I feel you man, my save also got deleted once(had almost every delta captured

Yeah, I had every delta too (except hoopa because i just couldn’t figure it out)

I’m about to go to route three when the director says “HEY NEW POKEMON COME HERE” so I go and find a “delta” in the sand and…a purrloin? I mean sure. Trick… Yes the period isn’t an accident. The name is “Trick.”. I box Bagel as I already have a dragon type and welcome Trick. to the team.

I finally go to route three without any interruptions and find a delta toxicroak. After wearing it down and paralyzing it, I barely catch it with only 3 pokeballs left. I name it Inferno because it just spammed that move and harden. Probably not going to use it though.

Metchi town is next, and after I heal up Nora challenges me to a battle. I beat up Nora’s charmeleon, then I take out dugtrio, but her delta quilava is a challenge, because it stacks up on hardens and takes out Trick… Spark manages to finish it off, but lives on a not so nice 10 hp. Her Banet is next and Crocs bites the heck out of it, then Aera finishes off her persian. I box Trick. and then try to hatch an egg I bought.

no i meant u now have a breeding stud mon

Hm, but because it’s a nuzlocke, i’m not sure if that’s allowed

I like secret bases so I bought one and went to the friend safari, where I caught a Numel named Volcano. I follow the river and almost caught a garchomp but hit it a little too hard. I go into Vipik city, and heal up my pokemon, and apparently someone wants a Seaking and they’ll give me a Landorous. (idk how to spell) Some guy sped up my hatching process and gave me a solosis. So I named if Failure and bought another egg.

I went back to grind some more and a sailor had a level 27 blissy so Aera tried to chip away at it with Aura Sphere, but it did so little damage. To make matters worse, it knew softboiled and double team (or an evasion raising move i forgot) and um my only choice was to use sky attack and hope that it’d hit, and thankfully it oneshot. But now Aera is level 31 while the rest of my team is only 24.

I headed into the gym and the first trainer had a team of level 30’s and I just barely scraped through because of Aera and headed back over to grind some more, catching a delta goomy that looked like a delta ralts named Muddy and headed back on over to the gym.

I took on Xavier and he led out with a crocconaw, and I led with Guardian. I used roar because it probably had ice fang and kriketot was dragged out, which I killed with a few Dragon breaths. He switched his crocconaw back out and I used Fruity, which tanked an ice fang and used energy ball back, which lowered crocconaw’s health. Then, I used energy ball again and he swapped to golem, which lived on sturdy, then used self destruct, killing Fruity.

This was my first death that really hurt. Feathers I didn’t really care about, and Trick. was barely on the team. Fruity was on my team from very early on, and the poison and grass coverage was wonderful. RIP Fruity.

With a heavy heart I switched into Croc, and he was able to take out Crocconaw and Aera took out his mienfoo. Then, he sends out a Delta charizard, and I sent out Sparks, which I switched into Croc. Xavier mega evolved and oneshot Croc. Two deaths. I switched into Aera, but she got oneshot too. Sparks and Guardian followed their companions. I lost.

whoooo depresing- but kinda makes sense, i was 3 levels lower. However, do you think I should restart the battle or just start over and scrap the save file?

When you’re so early you change the poll by 100%