I recently got a new computer and redownloaded Insurgence so I could play through and be ready when the final version comes out. When for some odd reason when I open the Player and press Enter at the image of the Mew, this Runtime Error thing comes up and I have no clue what to do. I’ve tried redownloading it multiple times and used the new launcher that was made, but I get the same error. I hope you can help. Thanks! 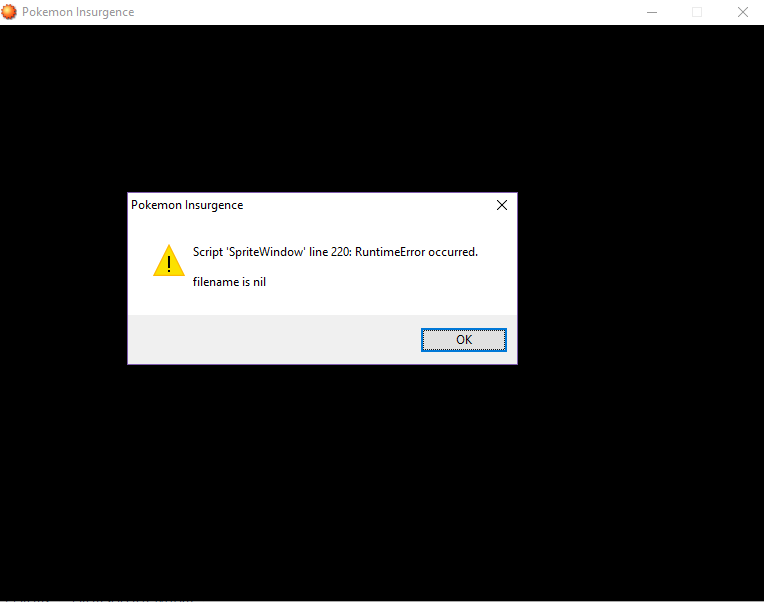 Hey there! I already played the game, got until the, Gym with the BIG spoiler, then I accidently deleted the game, tried downloading again, aaaand when I tried to start the game, I was greeted with this lovely message. [image] can anyone help me?

I’ve tried redownloading all the files, the game, deleting the game and redownloading, and doing everything that this post said to do, but nothing works, I get the same message and right now I have absolutely no clue on what to do right now. Would things fix themselves when the final version is released? Also, if you know what might be missing from one of the graphics folders, I could send you a screenshot of the contents and you could point out what exactly I’m missing. Thank you.

What system are you on, Mac or Windows? if Windows, which version, 7, 8, or 10?
Also, what program you use to unzip the folder?

I have fixed it. I know that my saved file from my old computer wouldn’t carry to this one. So if I’m going to be starting a new game, I just deleted all the saved files from Pokemon Insurgence Saved Games folder, and now it works! Thanks for helping!

Was gonna say that it may have deemed your save files corrupted and you might need to delete them and try, but you figured it out yourself