Alright, so I decided to make a team using one of the new megas, Mega Donphan. Let me know what you think, and how I can improve it 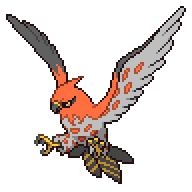 I’m gonna say invest in defense with Heatran and change it to bold. Earthquake is very prevalent and assault vest could help but you have stealth rock on it.

i have balloon tho

Me who’s an idiot

Honestly the team looks solid. Any problems in movesets evs or items are solved with one fix. Nice team

That is a really good, well balanced team
(Says the guy who knows basically nothing about competitive)

As someone who fought many time against this team, I can agree its a good one.

Hovever, you should put the 8 EV for your Talonflame in speed in order to outspeed Kyurem-B without Tailwind.

you won because my gengar died

Well, as Donphan’s ability ignores immunities, EQ becomes Thousand Arrows. You could run a Hippowdon-esque set with SR and Roar, but offensive set-wise, this is pretty much the best set, though if you don’t mind losing utility Rapid Spin, Gyro Ball hits Ice and Fairy types though it’s a bit redundant,

I’m questioning the use of Celebi though.

I think Rapid Spin is better because as Clefable being the most common fairy type, it wouldn’t take more than Gunk Shot. Plus, it is its only hazard remover.

Celebi is very useful against support Starmie and check Keldeo very well, so Azumarill have less pressure as its only check aside from Celebi.

serperior crying in the corner

Yeah, Rapid Spin is probably better here. Magma Storm/Lava Plume is up to preference here, though maybe Taunt/Toxic over Flash Cannon? TBH, a rare pick that completely walls most Keld is Water Absorb Jellicent. But yeah, I agree with Sbeve that Serp might be the better pick here.

i just wanted the bulk/psychic typing that celebi offers, but if u guys think serp is better here