Omfg i made a mistake

OK SO I DIDNT KNOW YOU COULDNT TAKE A POKEMON ODD THE GTS SO I DIDNT MEAN TO PUT MY ORIGINAL STARTER ON THE GTS. I DONT HAVE ANY FRIENDS WHO PLAY POKEMON INSURGENCE SOMEONE HELP. HE’S A DELTA BLASTOISE ALL I NEED IS A REGULAR BULBASAUR NO SPECIFIC REQUIREMENTS. (pls someone help me) )-:

I see the Blastoise (TuffBoi, right?), but my Bulbasaur is male. If you change the requirement to a male Bulbasaur, I might be able to make the trade.

Okay, after doing some reading it turns out that the GTS is extremely buggy to the point where it doesn’t even work anymore.

You can try restoring one of your backup save files in Saved Games. Insurgence makes a backup every once in awhile, so you might be able to get him back that way.

Wait but that means you can clone pokemon O_O

Hahaha, I thought of that too! Thankfully(?) the GTS is so broken that you can’t withdraw your Pokemon from it, so even if you did load a previous save, there would be no way of getting the copy back onto your own game.

wait how do I find my old save file??? 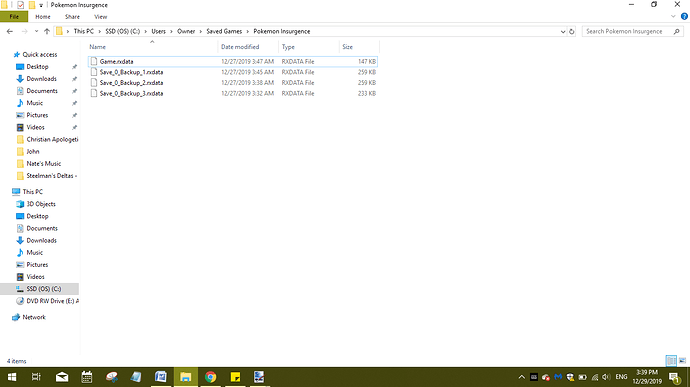 If you’re running a Mac computer instead, check out this thread.

Game.rxdata is your current saved game. The other three are backups that the game makes every once in awhile. To switch your current game out for one of the backups, just rename Game.rxdata to something else (like GameOriginal.rxdata), then find the backup from a time before you sent your Blastoise to the GTS (probably the oldest backup) and rename it to Game.rxdata. Once you open the game again, that older save will be loaded.

I sure hope that you haven’t been playing too much after you sent TuffBoi to the GTS. The backups are often overwritten with new backups as you play, so hopefully one of them is far enough back. I hope this helps!

–Servant of the King

This topic was automatically closed 4 days after the last reply. New replies are no longer allowed.