Help with my team elite 4

any ideas to change pokemon or change movesets/nature

I see lot of your team with mixed physical and special attacks. That is not something you usually want to do. Determine which stat (Attack or Special Attack) is higher and build a moveset around that.

Mew - If has a Choice item there is no point in having a stat increasing move. Mew also works better as a support than pure attacker. If you have it as a support you can teach it stuff like Taunt, Defog, Soft-Boil, Knock-Off, Will-O-Wisp, Thunderwave, Stealth Rocks, and also Psychic. If you want it as an attacker (which your entire team is), replace Amnesia with Calm Mind.

Nidoqueen and Nidoking are pretty bad without the Sheer Force ability, teach her Poison Jab or another physical poison move in place of Earth Power.

In regards to Pokemon Changes, Nidoqueen is definitely the weak link and I would recommend replacing her with a tanky Pokemon that can offer utility similar to the Mew moves I mentioned above. Pokemon like Delta Metagross Spider, Delta Muk, Blissey, Milotic, Jellicent, Ferrothorn, Amoonguss, or Tentacreul.

would delta snorlax be good? i did get the sheer force ability

i mean nidoqueen has the sheer force

should i still switch or can i leave the nidoqueen 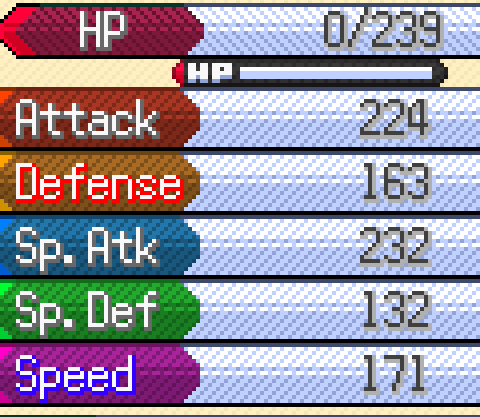 also what moveset for delta snorlax

I personally use mega D. Gardevoir/Gallade to sweep the e4, and I do no-faint runs. They’re definitely a good addition for sweepers. If you can get a Jellicent with good HP/Sp.Def, that’s a good tank

Also, if you can give one of your PC Pokemon the crystal piece(if they didn’t patch it), you can dupe it and keep it in e4, therefore getting Primal Giratina.

Your Lucario can go either way, it has a higher SpA IV, but more attack EV investment. You can use IV Stones to max an IV, and there are places to EV grind.

you could use a mega khanga with power up punch, return, drain punch and crunch though

You can, it’s just that it’s easier afterwards with more access to powerful mons like Delta Blaziken.

ironic that it’s easier to beat the elite four rematch without fainting, when they have stronger pokemon.

gonna do that, also gonna add delta gardevoir instead of mew, is that a good idea?