so this is like my third time redownloading insurgence and you would think I would know what to do but I don’t. I’ve never seen this but my terminal says Error: Cask ‘wine-stable’ conflicts with ‘wine-staging’ ive hunted my Mac and wine staging doesn’t exist. help is very appreciated thank u in advance

I have just the article for you… This also helps with other windows games on a mac. Guide to downloading on Mac

Yeah that part takes the longest

your error is because we changed wine braches as wine-staging began breaking things and you will need to run
curl -S "https://gitlab.com/levi506/installing-insurgnece/raw/master/assets/macOS/cleanReqs.sh" | bash
then
curl -S "https://gitlab.com/levi506/installing-insurgnece/raw/master/assets/macOS/install-wine.sh" | bash 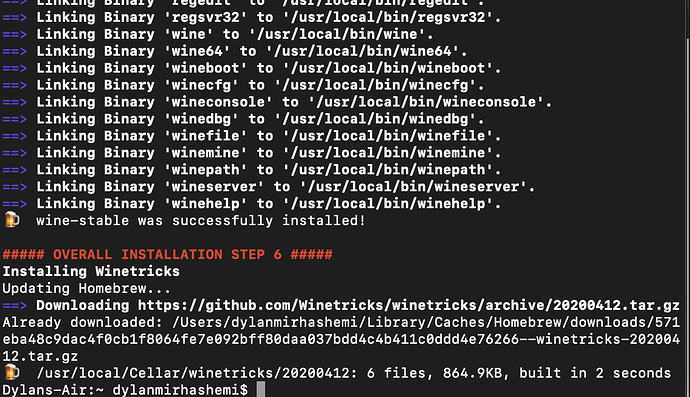 Hey-o! So apologies for the late response, but just here to try and help troubleshoot a little! As Levi said, the old installation used Wine Staging, however, we’ve moved to update the download to use Wine Stable, which is why he recommended you to run those two commands, as it cleans up and reinstalls the packages necessary to run the game.

If everything went smoothly, it should guide you through a few different steps in Terminal, and occasionally will ask you for your password. It’ll look as if you’re not typing anything in, but it just hides characters for security, and will still let you type it in.

In the screenshot you sent, it looks like everything at least had gone smoothly so far. Did you try restarting your computer and running the Run-Pokémon-Insurgence.command file? That’s the normal process to follow to run Insurgence through the Terminal download.

A few troubleshooting questions and answers!

“I can’t find the .command file to run on my computer?”

“I found the pkmn_insurg folder, but there’s no .command file in there to run?”

“I’ve tried all the following, but I still can’t get it to work?”

I know this was a lot of information to take in all at once, so if you ever need help, please let me know! Feel free to respond either to this thread or DM me on Discord at Crimson#4138 and I’ll be happy to help out!

Crim u are literally a lifesaver. it now says the Run-Pokémon-Insurgence.command does not exist. I might have skipped a step but I don’t think I did

“I’ve tried all the following, but I still can’t get it to work?”

If you still can’t get the .command file to work, try the steps under this part of my post to run the game using Wine Stable! :>

it works. Thank u so much also ill be ready for that beldum in a few min

Ive been trying to install insurgence for a while now and ive tried everything in the discord server but when i try to install the 6th step it doesn’t work, are there any fixes to this?