So I was bored and I couldn’t think of a Delta to do so I made this: 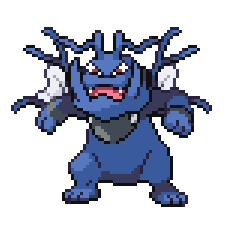 If you can guess the three fusions implemented in this fusion I will let you pick which Delta I do next from this list:

Not fighting in any of these because I have done 2 fighting Deltas in a row. Plus they can’t have their original typings in there so for example Delta Mareep couldn’t have electric in it.

Close very close. Might as well say the first one is Granbull since it is so obvious.

I am also not going to say the rest until I someone gets them all right. If a lot of people say repeated ones that are wrong I will just say that one is specifically not it.

It is Granbull and Kingdra but not Golduck.

Can i make one more guess?

Yeah anyone can guess all they want. You don’t have a limited amount of guesses

All i can think now is Granbull, Kingdra and Poliwrath

Can i ask for hint?

So the thing is the last pokemon in the fusion is not a water type.

It could possibly be Granbull, Kingdra, and Heracross

Not Heracross or Rampardos but you are getting warmer.