As promised so long ago (like a month), I made a bunch of Gen 7 and 8 deltas! And without further ado, the post. 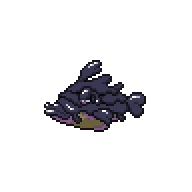 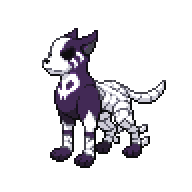 Kicking things off, it’s δBruxish, a Poison type. The Pollution Pokemon, its abilities are Poison Point, Gooey, and an HA of Wonder Skin. Then δBoltund who DEFINITELY wasn’t made in the process of making this post because I realized I had an odd number of sprites. Ghost type, it’s known as the Bandage Pokemon. Typical ghost shtick of haunting whoever killed it. Featuring death imagery from cultures all over. Bandages, Skulls, Hitaikakushi (thank you wikipedia), it’s a regular mortuary smorgasbord. Abilities are Shadow Tag and an HA of Cursed Body. 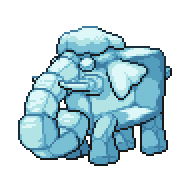 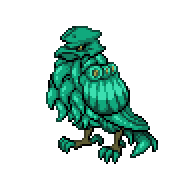 δCopperajah is an ice cube. Well, it’s actually several ice cubes. On legs. Anyway, known as the shockingly Ice Cube Pokemon, its abilities are Ice Body, Clear Body, and an HA of Heatproof. Ice is fun to sprite, transparency is super interesting. Not quite sure I’m 100% satisfied with it, but it looks good enough. Then there’s δCorviknight, the Davy Jones Pokemon. I’m PRETTY sure that’s public domain. If not… whoops. A Water/Ghost type, it searches the seas for ships to drag down to the ocean’s depths. Legends say that if you see it land on your mizzenmast, you have half a day. If it lands on your main mast, you have half an hour. And if it lands in your Crow’s Nest, you have half a minute. Its abilities are Cursed Body and an HA of Infiltrator. 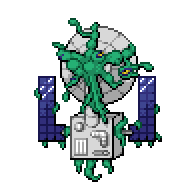 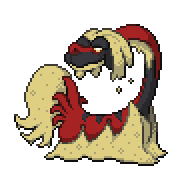 δDhelmise, the Interplanatary Pokemon. A Bug/Psychic type, it’s… pretty obviously an alien lifeform. Having taken over a satellite, it seeks to further its knowledge of the stars by journeying across them. Sometimes they fall out of orbit and must be launched back into space, since they cannot live in our harsh atmosphere. Its ability is Steelworker. Then δDrampa, the Sand Cloak Pokemon. A Ground type, it lives in, you guessed it, the desert, where lives a sedentary lifestyle, soaking up the sun. A herbivore, it eats cacti. Though sometimes it confuses Cactus Pokemon for cacti, and must be swatted away. Its abilities are Sand Veil, Sand Rush, and an HA of Dry Skin. 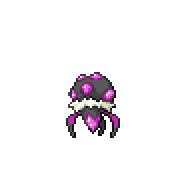 δDewpider and δAraquanid are both known as the Fuzzy Enigma Pokemon. They’re Psychic/Normal types, with the ability Fur Coat, and an HA of Poison Heal. These pokemon can be found in hollow trees, far from civilization. It’s quite the ordeal to find them, as they abhor contact with others out of fear of damage to their pristine… fur. Is it fur? I dunno.Fuzz? Fluff? Whatever it is, it’s their pride and joy. 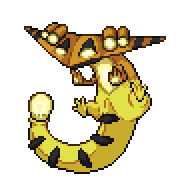 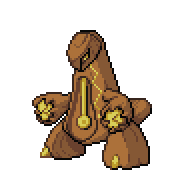 δDragapult, Electric type. Known as the Safety Pokemon, it soaks up sun using its thick black strips during the day, and then spends its nighttime patrolling, shining its lights to guide others. It can frequently be found hanging onto road signs on the highway. Its abilties are Illuminate (obviously), and an HA of Drought. Then δDuraludon, the Clock Pokemon. It’s a Grass/Psychic type that spends its days wandering the world, fixing errors in the Timestream where SOMEONE may have CHANGED their TIMES. Its abilities are Sturdy, Skill Link, and an HA of Wonder Guard. 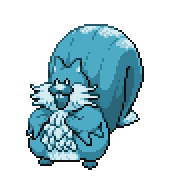 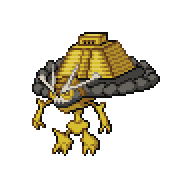 δGreedent, the Buoyant Pokemon, is a Water type. I… I don’t know what it does. It’s just… a Fat Water Squirrel. Its abilities? Uh. Oblivious, Rain Dish, and an HA of No Guard. Then δOrbeetle, the El Dorado Pokemon. It’s a Steel/Ground type. Its ability is Cursed Body, with an HA of Levitate. It lives in ancient ruins, burrowing its main body into the ground out of sight. It waits for archaeologists to try to excavate its backpiece before… attacking. Not a very nice pokemon, but hey, so few are. 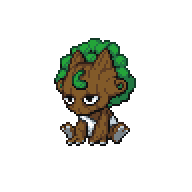 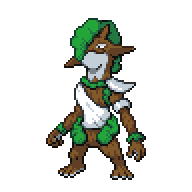 δToxel and δToxtricity are Grass, and Grass/Fighting respectively. They live in treetop villages in large forests, and have their own society of hierarchies. They’ve even been seen riding on Sceptile-back, brandishing wooden spears, and participating in mock wars amongst themselves. For this reason they’re known as the Practice Pokemon. Toxel’s abilities are Klutz, with an HA of Adaptability. When it evolves, Klutz becomes Grassy Surge. 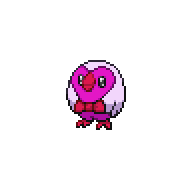 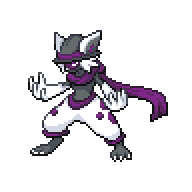 Then, in a stark contrast to the warlike δToxtricity, there’s δRowlet, the Lovebird Pokemon. A Fairy type, its ability is Cute Charm, with an HA of Dazzling. It is attracted to attraction, appearing in flocks on Valentine’s Day. If you see a flock of δRowlet on a couple’s house, it’s… best to give them some privacy. And finally, δZeraora, Dark type. Looking like the average fursona, it’s better known as the Thief Pokemon. It steals, not for money, but for the attention it gets. It LOVES attention, always positioning itself so that the cameras can catch a GLIMPSE of it. Its ability is, fittingly, Pickpocket.

And there it is, a Gen 7/8 Delta Dump for y’all to enjoy. I will, of course, continue to make Gen 7 and 8 deltas, they’ll just be in regular posts. As always, hit me up if you have any questions, or if you just want to tell me how cool I am. And I’ll see ya when I see ya.

god damn these are cool

Wow, these are epic! Here’s hoping some of my ideas and edits hit this hard! Nice!

Welcome to the community!