Character Description: Adela is a girl in her mid to late teens, standing roughly 5 foot 5 inches. She has green eyes that match the color of her ace pokemon and partner Hyderigon. Adela has fair skin and light blonde hair that goes to roughly her shoulders and flairs out ever so slightly with bangs that reach her eyebrows. Adela dresses in a sort of princess style with a light silver crown atop her head. Her dress reaches just above her knees with the main body of the dress being a shadow black. The collar of the dress is an off white or cream with the shoulders being layered, the top being a crimson with a cream pokeball on the top and the bottom layer being the same cream color as the collar. There is a crimson ribbon tied around the waist and under the color. The skirt is layered, the top being crimson and splitting down the center showing off a crimson piece that splits in a similar manner. Inbetween the split are two sets of lace ended fabric, the top layer being a light purple and the bottom being an off-white or cream tone. Underneath, she wears grey tights and black mary jane shoes.

Adela’s Hydreigon was her first Pokemon and is also her most loyal Pokemon, having been raised by her since he was an egg and been with her for many years since. Adela is rather elegant in personality, having initially been born in the Kalos region, to the family that owned the Battle Chateau. Having been around people of high status and those that were elegant in nature, she took on many of the mannerisms herself. Moreover, she would train her Pokémon at the Chateau, climbing to the highest rank achievable before she set off on a journey across several regions. She is also a rather strong-willed individual not often backing down when she is challenged. She is the sort of person that secretly enjoys when a battle comes right down to the wire, honestly enjoying the heat of the moment. Outside of battle, however, she can be quiet, observing the people that she is near before calculating what she will say. Despite being an elegant person she can be easily excitable, often quickly being embarrassed right after that occurs. She can be described by people close to her as a rather social person. 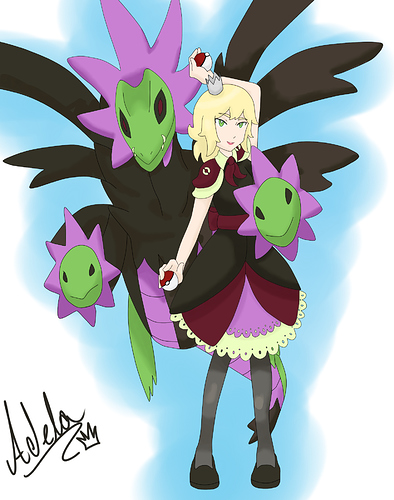 Let me know if there is anything I need to add at all. I plan to add in a backstory as well if I can manage to type it out with it making sense.