Alrighty, I had an idea for a delta pokemon, and the random number generator gave me Taillow’s number (Swellow will come later). Delta Taillow and Delta Swellow are Electric/Flying types.
This is a pokemon that has a unique ability; Wi-fi. What Wi-Fi does is similar to speed boost. When it is normal weather, Wi-fi will boost Swellow’s Atk by one stage. When it rains, however, it gets boosted by 1.5 stages. And when it sandstorms or hails, Taillow’s Atk stat will drop by one stage every turn. I feel this balances it out. The Taillow/Swellow will change form depending on the weather. It also is one of the few delta pokémon to have a gender difference (Striped wings, taller crest, and bigger feet for the males).
Anyway, you probably just want to see the delta now, so here is Delta Taillow, which will be followed up by Delta Swellow shortly. 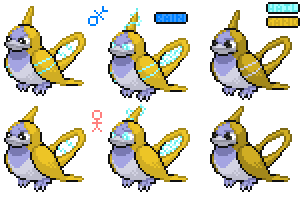 All right, after some feedback from am321ab, I’ve decided to switch it from Electric/Flying to a pure Electric type.
Also, here’s Swellow.

This is a really good idea, but there already is an electric/flying delta with D Koffing/Weezing and, though I don’t think its an official rule for deltas, both of its types should change. So I would recommend maybe making this an electric/water type.

Going back through your old stuff and damm this is really neat!