δXurkitree (and a brief update)

So… bad news first. I’ll likely be posting less sprites from this point onwards. BECAUSE (good news) I joined the Epsilon Dev Team. That being said, I still do sprites on the side as a cool-down and because I live for attention. So here’s today’s titular sprite. 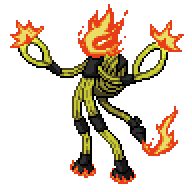 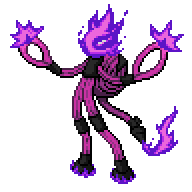 δXurkitree is a Fire type, known as the Crackling Pokemon. It’s also, notably, my first recent foray into spriting a unique type of pokemon. Y’know, the UBs, Legendaries, Mythicals. Anyway, its ability would still be Beast Boost.

Its inspiration was uh… that I wanted to sprite fire, and Xurkitree is cool. So I figured, “You know what’s cable-like and tangentially related to fire? FIREMAN HOSES.”

Yeah, my logic is flawless. 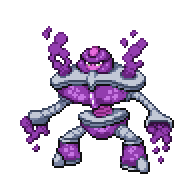 Then here’s Poison/Steel δBarbaracle. The Filtration Pokemon, it’d have the ability Poison Touch, and the HA Clear Body. Because we could always use more Poison/Steel delta pokemon :) 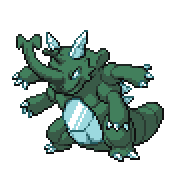 And lastly, δRhydon, Ice/Bug type. So back when I played through P:LA I caught an alpha rhydon at some point. And in doing so I gained a newfound appreciation for its design. Like, holy hell this is a cool pokemon. So then I made it a delta. Abilities are Ice Body, Slush Rush, and an HA of Rough Skin.

So that’s all for now. 3 deltas. Feel free to laud me in the comments, but until my next post, Boro Out!

so this is an epsilon leak!?!!

Congrats for getting into the epsilon dev team! Hope your spriting helps the team and I look forward to seeing more of your works!