What improvements can be made to this team?

Planning on doing the e4 rematch and dev island. All pokemon will be max level.

Alright, it is the dev island we are talking about. Now, having perfect natures and perfect IVs and mandatory, no fooling around anymore. You will have to spend a fortune at the Day Care.

In the Dev Island, you have 10 battles with only EchoTheThird to an extend, Suzerin and Sleepymon12 feels more gimmicky, all other 7 have very carefully crafted teams. With half of them carrying Uber classed Pokémon, every other aside from Sleepymon12 having top tier threats with them.

D.Charizard: Dark and Ghost are very redondant in term of coverage. Drop Phantom Force and Lunar Canon and use two move out of these: Sludge Bomb, Flamethrower and Ice Beam. Do the Delta Ditto quest until you get a Timid one with all IVs (except attack) to 31.

Machamp: Get rid of it, with the Primal Groudon, Primal Arceus and Lugia used on the Dev Islands, it is clearly outmatched. Use either your own Extreme Killer Primal Arceus or Primal Giratina, hopefully Timid but if it isn’t, you’ll have to get very lucky with the Poképon.

Delta Chandelure: Breed it with D.Ditto and get Fairy Aura (Hidden Ability).

Serperior: Ditch Toxic, get Glare instead. A Substitute + Leech Seed with Leftovers would be nice.

Overall: You may beat one or two with heavy luck, but you won’t stand a chance against the other 8. Basically, Primal Arceus can just 1 shot every single of your Pokémon if it feels like it with Extreme Speed as Primal Arceus ignore any type matchup and has STAB on everything. I really feel like your team heavely rely on the switch mode to get in. You can’t remove Stealth Rock and other hazards that can heavely mess you up.

Question, have you seen the teams of the dev? It don’t have a sarcastic tone, I just need to know if we are on the same page. 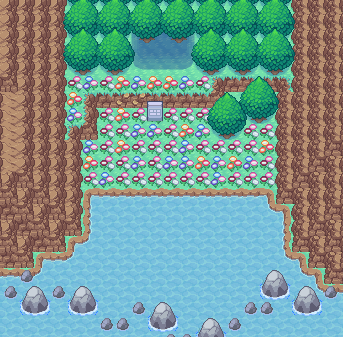 Dev Island is an island where the player has the opportunity to battle in-game versions of the Developers of Pokémon Insurgence. Though its interior can be accessed at any point after the player has obtained the ability to use Rock Climb, these...

I have see the dev teams, I know next to nothing about most pokemon strategy at what not. The only reason im doing these is for the living dex anyways. Also FYI you don’t have to breed or catch another pokemon for hidden abilities, you can take them to the guru in gaea town and he will change the ability to the hidden ability.

Ok, I have no idea why I thought you needed to breed for the HA. It doesn’t work that way anyway. Feel very stupid right now.

Anyway, is there a specific strategy you would like to implement or use? Like, using a New Moon team, Trick Toom, having a random Emolga because you like it, using your favourite Mega or anything else?