Deltas, some cool, some dangerous, and some have pompadours. But of all the crazy, zany, asinine, wacky, daft, and generally odd things I’ve made, here is probably my favorite. introducing, Delta Larvitar, Poopytar (Pupitar), Tyranitar, and Mega Tyranitar. 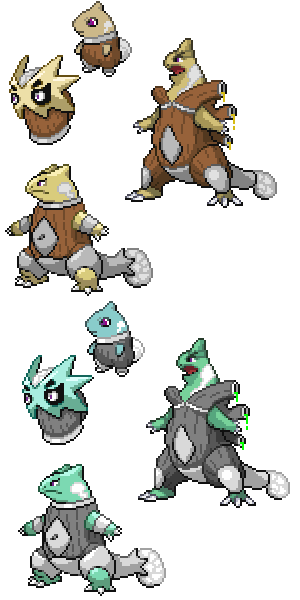 Starting off, we have Delta Larvitar, a drunk babby (I do not condone drinking underage). A Grass/Poison type, this delta has the abilities Tangled Feet, Oblivious, and an HA of Unaware. Delta Larvitar is known for its habit of becoming way too drunk. So drunk it can’t even say its own name.

Next up, we have Delta Poopytar (Yes, I will call it this anytime I have to mention it). Delta Poopytar is also a Grass/Poison type. This pokémon’s abilities are Oblivious and Harvest, and an HA of Unaware. Poopytar is oblivious to everything at this point in its drunkness. You could drop a piano on it and It wouldn’t even feel it.

And somewhat last is Delta Tyranitar, the (still) Grass/Poison type, with the abilities Early Bird, Oblivious and an HA of Unaware. Delta Tyranitar consistently has a hangover, making it always irritated, and just generally in a bad mood. And onto the mega. The mega has a useful ability of Water Absorb. It’s a bulky as f*** wall, with access to leech seed, toxic, toxic spikes, and with Water Absorb, it can make a great wall, especially in doubles.

Anyway, that’s pretty much it. There’s also a radioactive shiny, but whatever, Anyway, Boro Out!

Minty Pupitar is the best

That is amazing… I wish I coulld be like you… someday…

It’s not too late to start! Spriting’s a fun thing to do, and pretty easy. All you need is the internet and literally any art software that lets you use pixel sized brushes (and preferably zoom in). Hell, even ms paint works. Don’t be afraid to look up some tutorials and give it a shot!

gimp is #1 for free art software, and is my fave

I have some software but I am not great at using it. Is there any way to learn? Also I use mac so…

Look up some tutorials on youtube, or even just on google. I’ve got some links from Echo that I reference a lot. Here’s a general tutorial on some basics. It all starts with ideas. Look at other peoples’ art to see what techniques they used. But, do not, I repeat, do not use other peoples’ art and call it your own. Some good software that’s easy to learn is gimp, or paint.net. Alternatively, just go here and get a random pokémon, then come up with ideas for a delta. That’s pretty much it. If you want some real advice go on the discord. People would be glad to help, I’m sure (Discord Link).

I wish i could be on discord… thats all I can say on forums. I can’t join.

he is banned on discord Boro.

Emm… Im not supposed to talk about it I don’t think.

sorry, cannot disclose information on why he got banned.

7 posts were split to a new topic: Off topic replies

This is so great, as an European i 100% approve of this pokemon