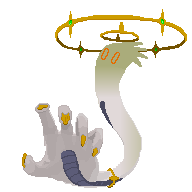 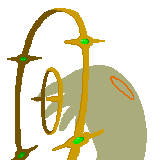 riding off of insurgence’s plot about arceus being a kind of godhood snatcher that steals another god’s creations, I decided to use elements of arceus’ unfinished beta design.

although i know that sprite was meant to be more detailed later in development, the amorphous empty eyed look helped make it look like the god equivalent of a ditto or mew. As if it adopted its normal form only to resemble the creation trio and usurp them.

The hand is a reference to the theory that arceus is based off a hand, with each individual arceus acting as one of the thousand hands of a single creature.

and of course the positioning of the halo is to draw similarities to eternatus. as if to imply they’re at least tangentially related gods that cruise around and invade other universes.

delta typhlosion is next. until then, have this little gift. A recolor of mega typhlosion: 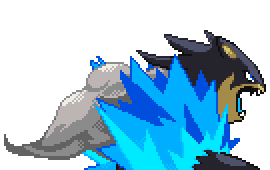 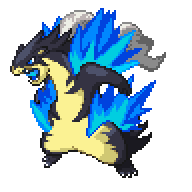 Very nice. I thought I could see beta Arceus in there.

I thought of that actually. gholdengo kinda looks like beta arceus in general now that i think about it.

This is really awesome! Love your approach even with the thousand arms kinda thing

Did you take inspiration from Eternamax Eternatus? The concept is pretty similar. Great art though!