When asked what delta he wanted Cow replied with,

FuckinCow,Man.png938×284 8.13 KB
So… yeah. I don’t know how volcano equals Fire/Steel, but whatever. I mean, I really should’ve expected something like this from someone who names themselves after a farm animal. 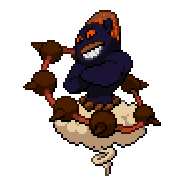 This delta was largely inspired by volcanoes. Its skin is made of obsidian, its ring represents the Ring of Fire, it’s standing on a lava disk, and its pants and fez are made of rock.

I decided to generally say no to the Fire/Steel typing since it makes no sense. So it’s a Fire/Ground type. It has the ability Solid Rock just to help with those pesky water types.

And now for the shiny. 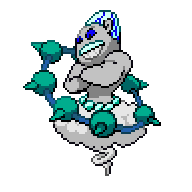 As a endnote, I apologize for the lack of quality. I’ve been a bit swamped recently. Hope you all enjoy, number 102 is coming up, and Boro Out!

Edit: I fixed the delta, so it doesn’t look like absolute s

One problem I have with this one is that I can’t really see it being a delta of thundurus apart from the little bits of tail you put on it.

Aaaa wtf is that even my pawniard is better 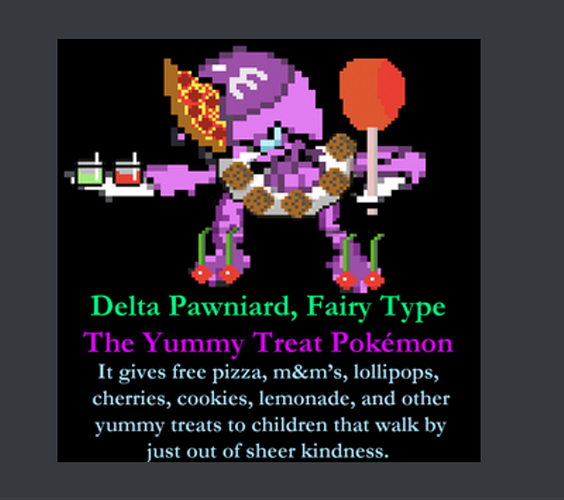 what is that even, Cow?

I want to see the evoultuions and maybe the mega

You actually want to?

thats a ugly one

yes it reminds me of the Munchos from lego mixels

Kinda sad that Cow’s delta pawniard is getting more feedback than my crappy Thundurus. Oh well, even I think it’s sh

I am strangely reminded of the genie from Aladin

COW GET THAT PAWNIARD OUT OF HERE RIGHT NOW