Theory: Could Reukra be the Champion?

Okay, there’s no easy way to say this - THIS IS JUST A THEORY
Also, this may highly change your opinions of several characters & otherwise really affect the way you play through the story. So just as an advisory, if you’ve not finished the game or don’t know the entire story, don’t read any more. It’s really a great story & I don’t wanna be the jerk whose stupid speculations spoil this golden gameplay for you. (Damn these alliterations xD)

That being said, let me continue with my theory.
Okay, so we all got several folders inside the main ‘Pokemon Insurgence’ folder when we downloaded & extracted the game. Yeah, so go ahead & open it. Now open the ‘Graphics’ folder. Inside the ‘Graphics’ folder, open the folder labelled ‘Characters’.
You’ll be greeted with a plethora of sprites. Just scroll down all the way until you come across the Trainers’ Battle Sprites.
Over there, there are many sprites of Trainers we have never battled (like Damian after Pokerus event) or just sprites which are never used in the game (like all the HGSS Gym Leader sprites).

Now notice ‘trainer075.png’. That’s the battle sprite for Orion, the 1st Gum Leader. The next sprite (‘trainer076.png’) is Xavier’s battle sprite, who happens to be the 2nd gym leader. See what I found there? This trend continues all the way upto ‘trainer080.png’ who is the 6th gym leader - Diana. The next sprite is Reukra’s sprite (see the wiki page for Reukra is you didn’t know that that was his sprite) which is labelled as ‘trainer087.png’.

Hmm… so, what happened to ‘trainer081’, ‘trainer082’ & so on?
Obviously they both are reserved for the remaining 2 gym leaders

So, judging by that, maybe ‘trainer083’ to ‘trainer086’ are reserved for the 4 Elite Fours! And then we would have ‘trainer087.png’ which would be… Reukra?! So… does that actually mean… that Reukra IS the Torren League Champion? (Or maybe he isn’t but he’s going to overthrow the current champion)

What further supports this theory is that we have never battled Reukra. It was always Taen who battled us. This could be because Reukra is a lazy bad boss who wants his subordinates to do the dirty work of battling some kids… or maybe because the Game didn’t want to give away Reukra’s team!

Also, Reukra is always hunting for ‘the perfect pokemon’. Maybe he will acquire it eventually & overthrow the current Champion? Of course, overthrowing somebody as the Champion is very much possible as Red overthrew Blue as the Champion in Pokemon Red & Blue.

So its either this or that. Or its not & I’m going crazy over a little coincidence.
What do you all think of this theory? Does this seem likely or is it too far out there? Comment away!

A little proof - just in case: 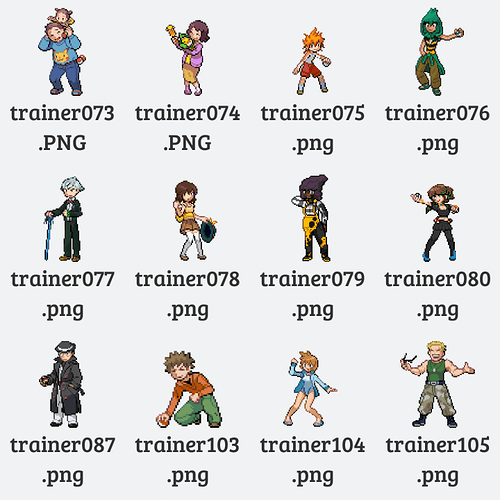 What I think is that maybe they are just gonna add the sprites for last gyms and elite 4 when next patch is out, so while were on this topic, I have created my own theory on why he would be past elite 4. So, my theory is that maybe he completes the Perfect Dragon post-game and then it stems to a different post-game region where you follow the Perfect Dragon. Probably wrong, but just a theory.

I don’t think it’s Reukra, but I think the lack of a sprite means it’s someone we’ve battle before whose going to be reused.

Personally I’m gunning for Poke-Daimen, but it could be any repeat trainer. I doubt it’s a cult leader though (unless the second augur makes a comeback since he’s the Augur), since the E4 is a reputable organization. That said, where are they in all this fighting? Seems a bit sketchy.

I highly doubt that its anyone we have met because the E4 members’ trainer numbers are missing along with the missing Gym Leaders’ numbers which means they will be adding sprites later, but not entirely impossible that they will add people we have battled as the E4 Champion.

In my opinion, the E4 might consist of Sky Cult Executives and the Champion would be Jaern.

LOL you were right.