This happened a long time ago, but I don’t understand why it was changed. The old one feels much more appropriate for the typing, as the new sprite has no Psychic feel to it. So yeh, proposition to change it back?

Old vs new sprite for reference: 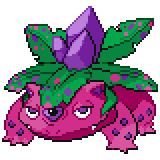 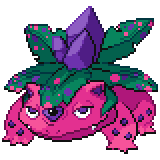 Get the old sprites and put them in your Graphics folders, problem solved.

the mans got a point haha

so you’re telling me you see Psychic AND fairy in that old sprite? because the complaint was that people didn’t see enough fairy, and that people thought the old sprite was ugly. We did not change it because we WANTED to, we changed it because people continually told us that the sprite was not good.

I mean, to be fair, the old one didn’t have any Fairy-type feel to it.

Looks more of a Psychic type on drugs.

Fairy is a pretty broad typing appearance wise. A lot of them are pink and cute, but you also have things like Gardevoir and Xerneas that look more regal and proper. The only thing that encapsulates them all to me is that they appear to come from an Alice in Wonderland-esque enchanted forest.

The old Venusaur fits that bill well enough for me and I can plausibly see it in the deeper regions of said forest as a sage of sorts. I’ll concede it definitely looks more Grass/Psychic, but the Fairy characteristics are still visible.

The new Venusaur just looks pure Fairy. Perhaps if you changed it’s eyes to the same trance-like ones as the old Venusaur, but as it stands, I feel the old sprite is overall more appropriate.

The old sprite doesn’t have any Fairy appeal to it, purely looks bland original Grass/Poison with some Psychic feeling. The primary typing is Fairy, so it should look more or so prominent to that typing. Psychic typing is not usually about the looks, but the Pokemon mind control and ability.
So, your reasoning doesn’t really explain anything at all but the personal judgment for the “preferable looks” for you. If you don’t like it, change it back to the sprite of your liking.
Both sprites are good, but the type element should be noted.

While I disagree with your statement, it seems I’m in the minority so I’ll drop it

I’m gonna be absolutely honest. If I were to change it back or change it again, it would be the third time I’d revisit this line. It’s more than likely going to stay the way it currently is. We have much work to do for 1.2 and have no time to revisit this.