title is pretty explanatory and here: 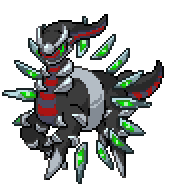 they both go in the battlers folder btw

Looks like some odd things happened to the coloring of some sections and their shading after the change but it’s an interesting color choice.

Ok.I really want to change the sprite so i wanted all of them together.Post it whenever you want!

Which program do you use?

I meant the normal Arceus,Not overworld of primal Arceus!