I’ve just come upon an issue.

After weeks of setting up Whipped Dreams, waiting for Midnight, and resetting with a bit of a break up until recently to play another game, I’ve finally managed to catch a shiny Delta Wooper.

Unfortunately, it has a 0 attack IV which is no bueno so I’m in Samsara cave repeatedly smashing rocks hunting for an IV Stone.
All was well until Delta Wooper leveled up from battles with Rock Smash spawns and evolved.

Now, whenever I transition between areas (i.e enter or exit Samsara Cave), use the Pokemon Center Nurse, evolve a Pokemon or exit a battle, I’ve been getting the following error: 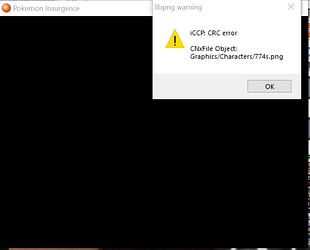 Thus far it hasn’t crashed the game, the game resumes after a click or two of the ‘Ok’ button but it’s still rather inconvenient and worrying.

probably dont have that pokemons sprite

yeh u dont have that pokemon sprite letme attach it here 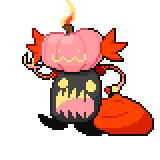 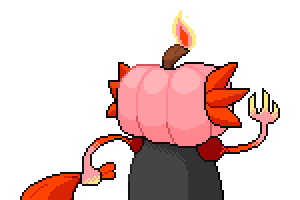 Strange because it appears as my follower and in battle.

hmm maybe just a glitch?
it seems to not access to png for the follower sprite

I’ve just deleted the game and unzipped it again but no dice.

I swapped the Pokemon at the front of my party/my follower and the error ceases so you seem to be right that the game is failing to recognize the Shiny Delta Quagsire follower sprite.

I’m now about 85% convinced that this is a glitch that is beyond my control.

I’ve just deleted the game and unzipped it again but no dice.

This almost certainly wouldn’t have helped in the first place since save data is stored elsewhere.

Oh I see.
I’m afraid I’m not that savvy when it comes to this stuff.

hmm maybe you named the follower sprite wrong? also there are 2 sets of follower sprites for each mon (2 for shiny and 2 for reg, so 4 total) so try changing both ig.
also gg on dat shiny, hopefully i can get my delta emogla soon too lmao

I didn’t name the files and don’t know where the follower sprites are to look. I’ve checked the Graphics folder before and the closest I could find were the mini profile sprites.

you seem to be right that the game is failing to recognize the Shiny Delta Quagsire follower sprite.

theyre in the character folder. you might’ve also misplaced the sprite. another solution would be to ig not have the delta quagsire folllow you at all. that might help you temporarily atleast, if nothing else

theyre in the character folder. 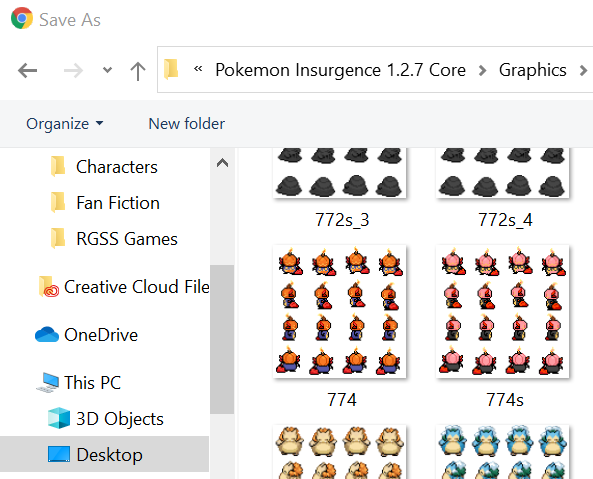 another solution would be to ig not have the delta quagsire folllow you at all. that might help you temporarily atleast, if nothing else

Yup, this is what I have been doing. I’ve only been putting it at the front of my team for Audino training.