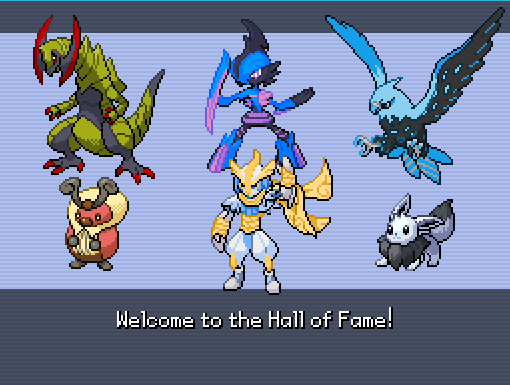 -False Swipe (Ignore it, I use it as a catcher)

-Uh, he’s not high enough level to get a fourth move yet.

Replace either Dragon Claw or Outrage on Haxorus with Earthquake. It gives you better coverage.

Replace either Earthquake or Leaf Blade on Delta Gallade with Wild Charge.

0/10 because of that horrid Gallade. Trade that away immediately to me someone to improve team.

I feel like your team need to be more built around Jim, as he is the offensive power house of this team it seems. Try seeing if you can get some baton passes going for him so he can show off his true power.

Ah I see. I’ll probably build the rest of the team around him as a sweeper instead of a support. He is truly a hero. He’s the Pokemon we need, but not the one we deserve.

What is this xD !?! how can a kricketot team be competitive !?! If you managed to win the E4 rematch with that, then respect…

Maybe I did win the rematch with it