This is my current team: 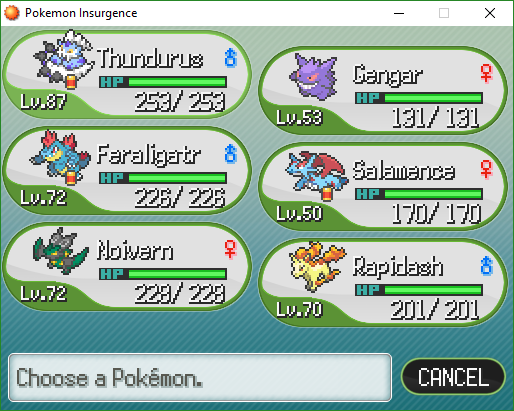 I am currently bored of grinding )

I haven’t EV trained them yet.

I know the rapidash is useless, but I have it only for the flash fire (and it has been with me since the beginning). I want a better pokemon in place of this Rapidash.
Also, should I keep my D-Noivern? That is my fairy counter. Gengar is only a soft check.

Also, tell me if I have to change the move sets or nature on any pokemon.

It would definitly help

Leaf Tornado on D-Noivern should definitely be replaced with Energy Ball or Petal Dance. Replace Roost or Boomburst with Focus Blast. For in-game healing items are better anyways so Roost is probably the one to replace, but if you want to keep it Boomburst isn’t that useful so it’s probably okay to get rid of it.

I was of the opinion that boomburst was a high BP move, but since it doesn’t even get stab, and normal isn’t a good coverage (late realisation) I think I’ll replace it with focus blast. Thanks for your input.

I use Electrivire for its Livewire, so I only use Hypnosis to hit flying types, which is why I also run Dream Eater.

Hypnosis is already a shaky move, and Dream Eater is so situational you might as well just not have it. It doesn’t even cover its weaknesses. Dazzling Gleam or Focus Blast actually cover weaknesses.