Primals Released in Insurgence: Broken or Not?

…is bulky boi/gurl. With 150/135/135 bulk, it is pretty boss. And that ability gives it ONE WEAKNESS! But it can be bypassed by Mold Breaker, Teravolt/Turbolaze. Not a common ability…but still, BROKEN.

…GETS STAB FOR EVERY ATTACK & ALWAYS DEALS NEUTRAL DAMAGE (which doesn’t affect either of his typings at all). So this thing is totally not broken.

All of them are BROKEN in their own ways. So yeah. Goodbye!

What are you still doing here?

Sure, I won’t reply.

You forgot about Groudon and Kyogre

These are not primals released in insurgence

But they are still primals in insurgence.

Btw, I’m pretty sure primal gigas gets work up as setup, which, isn’t the best setup, but it could work ig

I would personally think Regigigas is the worst of the 3 Primals. Unlike Giratina and Arceus, it would fit in Uber instead of AG. A strong Uber nonetheless, and one of the best offensive check to Groudon, but it is walled by Ghosts like Mega Gengar and Giratina-O. It also have difficulty against Darkrai if it is not behind a Sub. Mega Blaziken, Mega Chatot, Mega Flygon, Mega Delta Bisharp and Mega Scizor are also decent checks. Whereas Primal Giratina has only Primal Arceus and and Stealth Rock as weaknesses and Primal Arceus is just outrageous.

BUT the the design… I like not to think about it. 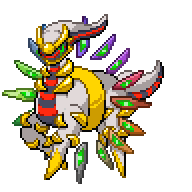 no offense to the devs but it looks unbalanced (probably because you can edit sprites so, if we didn’t like it we could replace it)