All righty, here’s a spoopy delta. It’d live in Maelstrom 9. They’re all based off of angler fish, to an extent. Anyway, here they are. 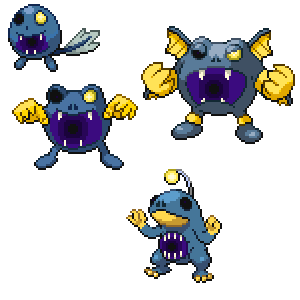 So, first up, Delta Poliwag. A Water/Ghost type with the abilities Hydration, Illuminate, and an HA of Spooked (Each move gets an additional 10% chance of flinch). It swims around in the dark, feeding off animals that think it’s a harmless Lanturn.

Next, Delta Poliwhirl. A Water/Dark type with the abilities Hydration, Illuminate, and once again, an HA of Spooked. (See above). This delta is basically an underwater freerunner, running around, jumping off underwater cliffs. The divers who got attacked by, and survived, this pokémon reported seeing a bright light jumping around, before pain.

Onto Delta Poliwrath. This Water/Dark type has the abilities Pure Power, Illuminate, and an HA of Spooked (Just read the poliwag HA again). It can only be gotten if you level up a male poliwhirl to level 40. It is the king of the deep sea, ruling with an iron… mouth. Rumors say that it rides a chariot drawn by Huntail.

And finally, Delta Politoed, a Water/Ghost type with the Abilities Cursed Body, Illuminate, and an HA of Spooked. It is gained when you use a dusk stone on a delta poliwhirl. A legend was once told of how a Delta Politoed somehow destroyed an entire cruise ship.

Anyway, that’s it. Boro Out!

I just love them

Give me that Delta Politoed right now it’s amazing

Can I change the sprites of pokemons by changing the files? If yes can i use your Poli Line? I really like it?

Yeah, no, go ahead. Glad to see that you like em.

I like and fear them. Only question is does the politoad have two mouths

The top mouth is a fake one. It can’t open.