So continuing on from Shade Forest, me and my wonderful team went into the Telnor Cave, where our encounter was a Tauros which we caught and named Red Bull! We then ventured across Telnor Cave until I found cultists, and then me and Damian went back to Telnor Town and fought the cultists! After defeating them, I went on to Route 1, where I found a Yveltal as my first encounter, and then I killed it before it killed everything LOL. In Dark Cave, I found a Florges which I caught and named Oprah, and it also knows Moonblast and Petal Dance apparently o_O. in the Hidden Grotto I found a Deino, which will probably never become a Zweilous or a Hydreigon, but Dragon Rage is broken early on and it helps with Ghost and Psychic-types, so Albatrum is a welcome member of the team! Then I went to Midna Town, and did the whole Nora event, finding a Lumineon in Midna Mines in the process. (I caught it but I won’t use it since I already have Slowbro) I won the Trainer School tournament and then went on to Route 2, where I got a Old Rod which I used to get my Midna Town encounter, probably the best encounter I’ve seen so far, a VICTINI!!! (I CAUGHT IT TOO!!!) Then I went to Midna Gardens and fished and found a Tyrunt which Roared me out ;~;. Also my Route 2 encounter was a Charmeleon but I had no Poke Balls left so I couldn’t catch it xD. So now me and my team of 6 is getting ready to fight the Ancient Ruins, and it’s time to fight! 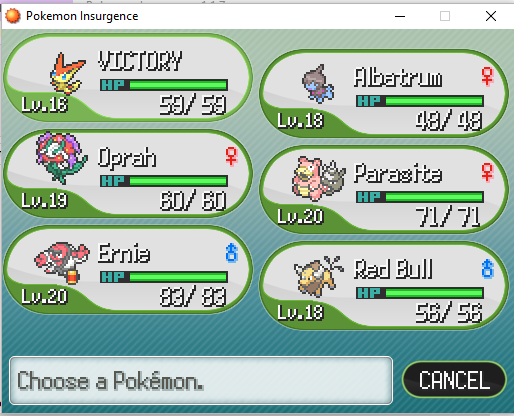 deino will be horrible until it evolves into hydagon so good luck.