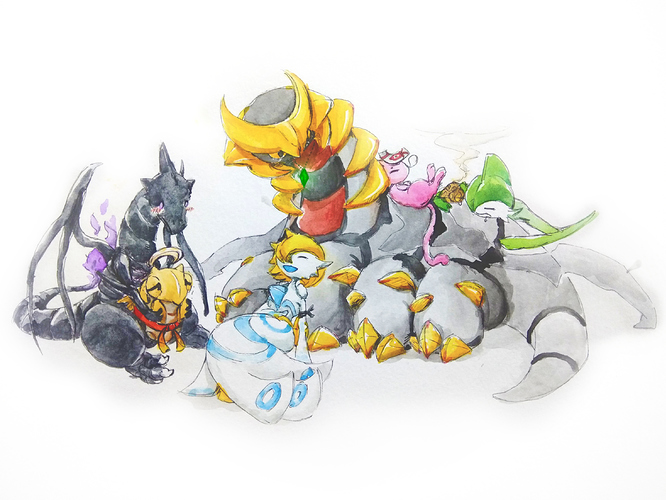 By the order that I obtained them:

Mega Delta Charizard, Hasty nature.
Move: Sludge bomb (for those pesky fairy), shadow ball, fly, ice beam.
All rounder pokemon that I keep around because its my starter and highest level poke.

Primal Giratina, Rash nature.
Move: Aura Sphere, Earthquake, Thunderbolt, Dragon Pulse.
The main wall of the team. Catched after 1 hour SR-ing because I didn’t prepare anything for his battle. I have difficulty choosing the moveset though.

Gallade, Relaxed nature, holding Lax Incense because his defence sucks.
Move: Leaf Blade, Drain Punch, Thunder Wave, False Swipe.
Joined my team as a Catcher pokemon (Max Atk and Speed EV). When I challenge Elite 4, I replace the Hypnotist with other attack move and now I can’t get it back

I managed to beat Elite 4 with the first 5 pokes and wiki. Also beated the Timeless with Shedinja just kinda sitting there waiting its turn lol. Already beat Taen for the final time and now I just start exploring Holon. I planned to rematch E4 without fainted pokemon for that red gardevoir. Can you give suggestion to improve my team? Maybe what moveset I should use? Now they are around level 95-96, except the shedinja on lv 91.

I’m curious about fly on D. Charizard. I feel it would probably be better off with dragon pulse and replacing ice beam with either dragonify or taunt. Hasty is fine as far as natures goes.

D. Gardevoir is pretty standard, but the bold nature isn’t doing you any favors.

Running Mew are a pure Special attacker but not running psychic or psyshock just seems odd to me. Surf should never really be ran when Scald is an option also. Given that your team is pretty hyper offensive It might be best to run Mew as a cleric, hazard setter or baton passer. at the very least if you want to stick with your hyper offensive team it might be worth considering running a physical set on Mew to even the physical/special split. Regardless, considering Mew can be tutored even the signature moves of other legendaries there are much better options move wise. As it’s set up now, D. Chandelure would do everything its doing but better.

For Gallade I wouldn’t bother investing in it’s defense. Thunder Wave is also redundant with Livewire. It would probably be best to replace it with Swords Dance and swap out False Swipes with Psycho Cut. It’s fine to have a mon dedicated for catching, but have that mon boxed and only take it out for those occasions.

I don’t really know what to say about Shedinja as I’ve never really used it. Just looking at its moveset, shadow sneak and X-Scizzor look alright, although given how the mon works I would probably set this up more as a stall mon. I would probably swap out Aerial Ace for Toxic/Will-o-wisp and Dig for Protect.

All in all, the team is way too offensive oriented and unbalanced for my tastes. 5 of your 6 mons are weak to dark/ghost types. Well technically 4 because of Omnitype, but if it wasn’t for Primal Giratina being hax levels of broken I could see something like a Mega Sabeleye walling your entire team. D. Charizard and Giratina are pretty much redundant offensively. The only out you have to fairy types is D. Charizard as well, which is equally weak to them.

Delta Volcarona with armor could be a pretty good addition to your team. The only real type weakness it has in ground type is nullified by levitate.