Hey! As some of you know, I’ll be working on an insurgence comic once 1.2 comes out. That’s gonna require a lot of background characters that I don’t have the creativity to design.

That’s where you come in! If you want to appear somewhere (a random place unless you feel like specifying), send me your trainer sprite and/or 1-2 pokemon you’d probably be seen with.

Name: Cow (yes, I do have an IV stone in hand at all times) 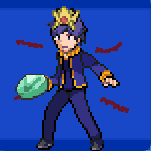 What pokemon would I have? Probably my shiny aegislash

Where would I be? Easy. I would have a shop in the black market and I’d probably give you some terrible deal like 400000 pokedollars for a jolly sunkern

I’m Cheese, that dude who pretends he’s rich and tries to sell you cheese in the shape of a pokéball. I probably will be next to cow, and ranting about how my cheese is better than whatever he’s trying to sell. I would probably attract Dedenne to eat my cheese, but I would shoo them away.

Whew took a while to make, but it’s finally done!
Name: Snuewks 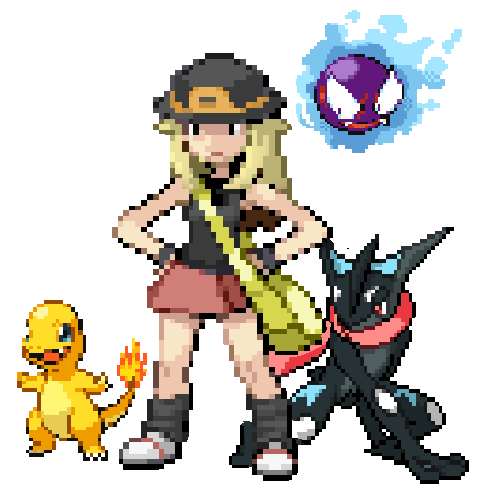 I imagine her being in close vicinty to Cow. She is a washed-up Ex-Adventurer that failed to stop the evil team in her region, had all her competitive Pokemon stolen as poor old Snuewks then was left with only a bunch of shinies.
So now she’s at the Helios City Blackmarkt, trying to sell her shinies for strong Pokemon she can use for her glorious Comeback. (She’s not very good at getting good deals, since she once traded that scumbag Cow her shiny Gastly for a poorly bred and horribly trained level 5 Aerodactyl.)

All of your trainers are amazing, thank you!

I just realized that i can only have 1-2 Pokemon at my side! In that case I’ll go with the Greninja, since Cow has the other 2 on the picture right now

*shamelessly happy to find a use for an old sprite

Name: Lavender
Pokemon: Donphan
Lavender adopted “Alfredo” as an egg, when two of the neighbors’ Donphan bred, and there wouldn’t be room for another mouth. She’s a great chef, and originally came to Torren after hearing about “Le Feu”, but has found so many unique culinary differences that she’s decided to stay and tour them all! Alfredo loves picking berries…and challenging anyone that passes by (and it’s not like Lavender minds, most of the time)
Alfredo also likes cheese. A lot.

(okay more of an OC than my actual trainer…shhhh…) 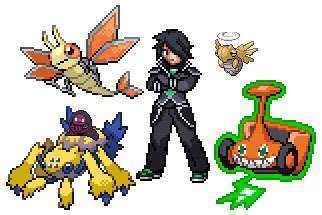 Location: I don’t mind really. Probably either in the Black Market, trying to get good deals with scumbag persistent traders like Cow and Cheese, or in the Utira Library, studying up on the best battling strategies. 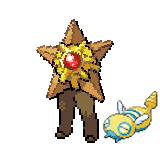 His story is that when he was attending medical school he ate a Dorito and turned into a 5-edged illuminati Dorito and moved to Torren. He created the Cult of Magikarp and has been collecting them and filling up his PC. He says that there will be a Judgement Day where a Magikarp will fall from the sky and use splash. He then traded Cow his perfect IV, perfect EV, and perfect natured competitive team (all of them holding IV Stones) for a Quiet natured Dunsparce.

He will sit in front of the Jade Tower saying “The end is near! Lord Magikarp has come!” Points to a fisherman catching a Magikarp.

Yours is one of the best, ahahah

Why thank you kind sir. May Magikarp spare you on Judgement Day.

I’ll see if I can find the sprite for this, but I would love to see a hex maniac trying to send out something like a dusklops, and instead sends out her sylveon. Location could be anywhere a trainer battle might be appropriate.

P.s : where could I look for awesome sprites. Or how do i make one?

I don’t know too many good sprite creators, but there are a bunch of premade ones on Pokecharms. 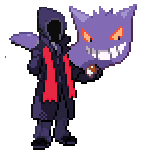 Known only as Sisyphus, not much is known about this mysterious wanderer. Their chilling gaze and secretive ways drive off most people, but those who persist find a clever and dependable friend. Their connection with Gengar is unparalleled. Their travelling brings them all around the Torren Region. Along with Gengar, they also travel with Sableye, Bronzong, Zoroark, and Infernape.

This is Zed. Socially anxious, intelligent, and ambitionless, he managed to come to Torren in yet another ploy to escape the responsibilities of normal life. He doesn’t have many friends, and his apparent disinterest in other people tends to ensure it stays that way. He travels with his closest friend, a Quilava named Leo, and usually sticks to the forest areas. He loves khakis and his jacket (he’s had the thing so long it has holes in the elbows that you can see the insulation through, but he refuses to get a new one). Strapped to his back is a pouch which his short-legged companion usually sits in, raised just high enough to look forward over his shoulder.

If you were to encounter him he would likely try to avoid you, but if you do manage to challenge him, he’ll more than likely accept.

Figured I’d redo this now that I have some handy little sprites, plus everyone was coming up with these cool stories so I wanted to do this properly. Enjoy: 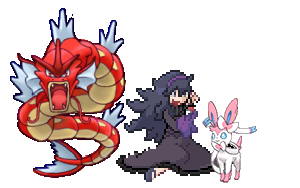 Name: Lavian Vent Fleur
Lavian is a native of Kalos, but found herself drawn to the Torren region because of its higher than usual number of delta pokemon and dangerous cults. Convinced that some dark conspiracy is involved, she headed there without a second thought. Lavian is a bit of a shiny mareep when it comes to being a hex maniac. While she dresses and acts the part, she has yet to actually acquire any ghost type pokemon. She intended to evolve her eevee, Nightburn, into an Umbreon but it instead became a sylveon because of her affectionate doting.
Lavian’s shiny gyarados is named blondie for the gold colored scales he had when he was still a magikarp. As one of the first pokemon she caught in the Torren region she’s developed a strong bond with him as well. While others might find him scary, she insists he’s really just a big softy and thinks he’s rather cute.
Beyond Blondie and Goldie, she keeps various delta’s in her party, including at least one of the Delta Liligants if not both.
Lavian prefers to travel light and carries few possessions beyond the basic necessities. Of note, she has a broken pokeball she insists was once used to try to contain the dark powers of the Legendary Pokemon, Yveltal. She acquired this powerful relic(?) in the Blackmarket of Helios City using almost all of her travel money.

Location: She wanders the land in search of clues to the “dark conspiracy.” Rumor has it she sometimes stalks individuals to get information on what the cults are up to, and she even supposedly infiltrated a cultist base once. 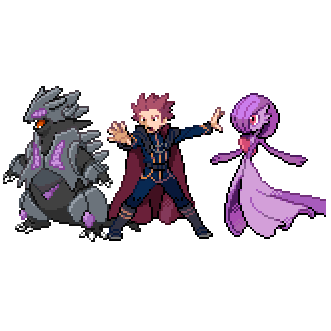 This is MeowCat, one of the elite 4 (if not then fine but gym leader please). He uses shadow gardevoir and shiny tyranitar (this is serenity and insurgences sprites, so thanks) and he isn’t centered around a type.