Today we will look at my amazing nicknames for arceus, lets begin.

thats the worse name i have ever heard

It MUST be a butt joke 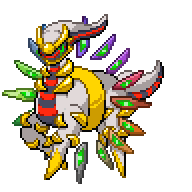 thats fine, but not as good as

Well I usually don’t nickname my Pokemon (exceptions may exist) so I have no nickname ideas. As I said, Asylian normally nicknames his Pokemon, but he only ever calls it Llama King.
Seriously though, what’s with the butt jokes?

are u a 5yo to talk about butts and farts?

i think of calling it AlteredG

but i am bad at nicknames so i asked for everyone else’s opinions(literally who calls their D venusaur calmest mind?)

no i just can’t over arceus butt jokes lmao

Should’ve known. That seems to be where most brains go.