These are just a bunch of alternate sprites for a few Shiny Pokemon to replace the old ones I don’t like.
There’s new shiny sprites for a bunch of Pokemon, like most of the eeveelutions; Flareon, Jolteon, Leafeon, Glaceon, and two for Espeon. These also support Mega Eevee!
Now there’s a new sprite for a silver-colored shiny Umbreon, meant to go with the gold Espeon.
'Cause… y’know… Pokemon Silver and Gold?

vee vee v2.png800×160 6.21 KB
There’s a new white shiny Gengar for consistency with its shiny mega, and an alternate version of that with one black eye and one flashing eye, meant to resemble Sans. 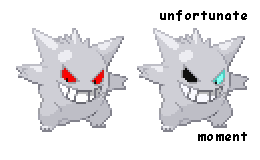 A pink shiny male Pyroar, which is supposed to look like Lion, from Steven Universe. 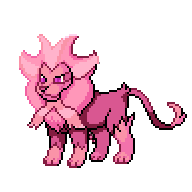 And, finally, my most recent sprite, an alternate version of shiny Larvesta and Volcarona, which, since it’s the Sun Pokemon, is loosely based on a blue giant star. I’m quite proud of these ones. 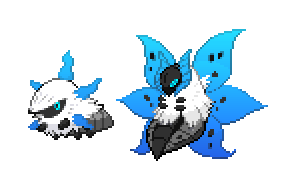 A new set of shiny Teddiursa and Ursaring sprites (both gender variants included!) meant to make them resemble black bears, rather than Scouts from TF2 with way too many hats and buckets of pink and lime paint. 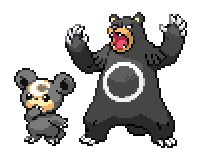 And yes, they all have backsprites.

I’m not taking requests, but I’ll be updating the download and this thread if I make any more sprites.

UPDATE- New Silver Shiny Umbreon, to go with the Gold Shiny Espeon!
UPDATE 2- New Black Shiny Ursaring/Teddiursa, because there’s no such thing as The Bitter Taste of Defeat and Lime bears.

I luv it tho

I LOVE your take on a shiny leafeon! It works so well!

that volcorona is hawt! love them all.

They look really cool, good job. Can you make overworld sprites for these please? Thanks.