For the next update, I would like to recommend making some specific healing items available to buy at the Black Market or Helios Department store or Quest reward.

I think leftovers can be bought on the top floor of the department store. Correct me if I’m wrong.

Leftovers can be crafted by the chef in Selene City with Fresh Water and Big Root. Big Root is crafted with Energy Root and Energy Powder (available in the Black Market) while Fresh Water will be obtainable from a sponsorship once that gets fixed.

@A_Wild_Noob_Appeared, Thanks for that crafting ( Cool! ) info, I am upscaling my eevee to fight a cult leader without mega evolution to ‘covet’ atleast one of his poke s leftovers ( he has 2 atleast). -I ll be stocking up on big roots from the Blackmarket that is currently available for sale. Donation and sponsorship are different and a requirement makes it risky as what happened to Pokemon Uranium in August 2016 is a DMCA reminder. Yes, money is easy to obtain till the intended money glitch in the game gets fixed, ie, im sure the developers know that the level trainer in the secret hideout Gives money instead of Taking increasing amounts of money from the player, as recorded on the insurgence wiki, there is a possibility this Might change in the next update and then money will be hard to comeby in a game that does need lots of grinding. I cant remember if zeta/omicron kept the money glitch with the level trainer in the final release.

You don’t need to abuse glitches for money. Competing in races in Sonata Tracks gets you over $5000 per minute along with occasional items once they fix sponsorships. Breaking rocks gives junk which sells for a lot as well. I have almost $400,000 right now just from Pokepon and Rock Smash and that’s just a side bonus for me.

If you need Leftovers, I could trade you some, I have more than enough of them 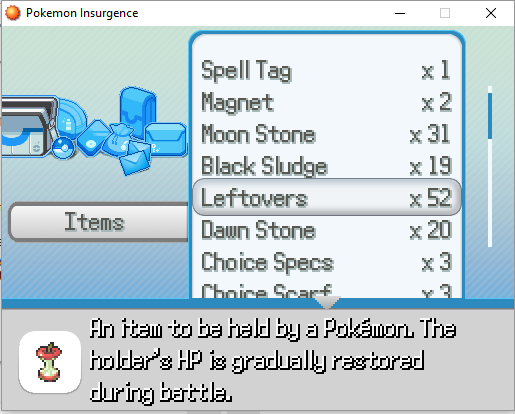 There was a glitch involving the chef in Selene City when trying to create Leftovers. You just needed Big Root (which by the way you can buy without crafting at the Black Market), even though it said you need Fresh Water, which is hardly obtainable in the current update.
I’m not sure if this is still working, as I made about 80 of them in the 1.1.7 update and haven’t tried since.

@skaterflips Thanks for confirming crafting still works, i ll get to Selene city . I battled the lugia cult leader trainer in whirl island who had 3 pokemon with leftovers, way to make battles tougher, lol, my eevee covet moved it, Turns out most steal moves (covet, trick, thief ), return trainerbattle stolen items , you only keep items stolen from wild pokemon. Also, I did see a sleeping Snorlax in the game ( Only munchlax and snorlax have leftovers as held item)