I’ve been trying to update my game to the newest version through the launcher during the past few days.

It was originally freezing or saying my internet connection wasn’t working, despite the fact that it was working fine on my browser. I did a little bit of browsing, and I found a few threads reporting the same issue.

Since this is a server issue, is it possible to fix it? If so, are the staff intending on fixing it?

Also, one of the fixes I’ve seen in response to this question is downloading the latest core and running Game.exe. The issue is, while I have the core, for some reason my computer won’t let me extract it. I get a message saying that the folder is empty, despite the fact that it said I had completed the download. Is there anything I can do about this? Did I download the wrong core, or is there something else I screwed up on?

I also tried updating via the launcher this morning. I was able to get it about halfway downloaded, but with my luck, the internet went off. Now it’s back on. Will the game continue downloading, or should I re-start the download? In addition, is it possible to update my game in a more efficient way, or should I keep trying to download it this way?

I apologize in advance if these are all really stupid questions. I’m not very tech-savvy at all, and I’d really appreciate your patience.

■■■■ the launcher, use either the torrent or a mirror download

I’m sorry, but I don’t really know what either of those are. Would you mind explaining them a bit for me?

(I’m sorry that I’m not the most tech-savvy)

Torrent is the ability for water type starte----- lol jk, torrent files download by using data from other people basically, however to open a torrent you need a specific program (I used uTorrent)

Thanks! I still need a little bit of help though- I downloaded from the mirror link on the forums, and I ended up with a rar file. Do you know if the WinZip option that site offers is secure? If not, is there another way I can open/run it?

Any standard .rar opener should work.

I was able to unzip the file using WinZip, which I’ve seen other users get to work. However, whenever I double click the exe file, It won’t run. 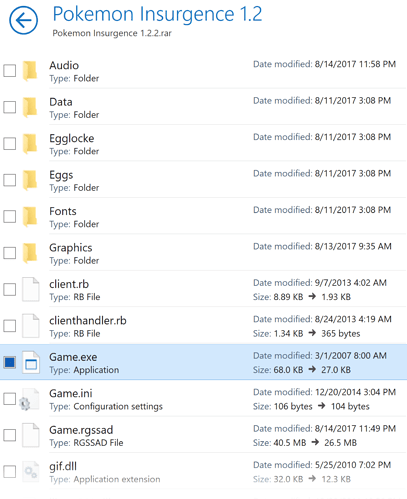 This is what I’m getting at the moment. The exe file doesn’t have the usual sun icon, so maybe that’s part of it? I honestly have no idea what to do at this point.

I really appreciate the help you’ve given, hopefully I haven’t been too much of a bother.