Is this team any good for story? 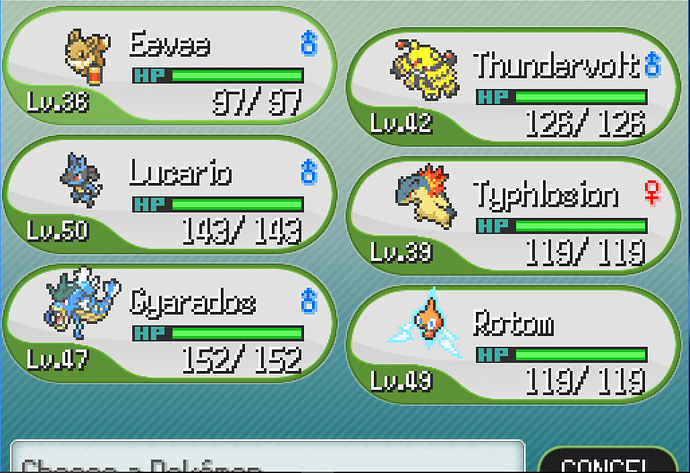 Evee(Run Away)[Hardy] ,Ice Beam, Flare Blitz, Moonblast,Leaf Blade Usally used for a decoy while I heal my other poke with revives potions etc.

Electivire(Motor Drive)[Jolly] , Screech, Electro Ball Discharge, Thunder Punch Used for mostly Electric and poke that are weak to it

Typhlosion(Blaze)[Docile] , Flame Charge, Swift, Flame wheel Incinerate Burning and attacking poke that are weak to it

Gyarados(Intimidate)[Impish] , Crunch, Ice Fang, Dragon Rage, Hydro Pump All around attacker except for electric which is why I have Electivire

Please let me know what you think or give suggestions or criticism.

How far are you in the game? It kinda depends on that

depends on difficulty too. If you run hard mode you will get destroyed.

On normal at Utira Library

don’t worry about comp too much on normals, just enjoy the game. and you can always get new pokes leveled quickly via level trainer.

Oh right now sort of stuck on the ancient Oracle in the library and my funds are rather small got any tips to beat him?

First off, decide whether your eevee is going to be a physical or a special attacker. If you plan on using mega eevee, special attacker is usually better, with moveset of thunderbolt/psychic/moonblast/foul play. Electivire needs a better moveset, breed it to get cross chop or something to give it a better coverage. I think your moveset does not work well, since most of your attacks are physical and you’re running aura sphere and calm mind. Replace it for something like close combat/bullet punch/swords dance/extremespeed or something like that. Typhlosion also needs a better moveset. Give it flamethrower/eruption/focus blast/extrasensory or something or build towards it. Gyarados is more physical than special, so give it aqua tail instead of hydro pump. Rotom is completely unnecessary, replace it with something that covers ground types well, since gyarados can easily be killed by a good electric type, making your team vulnerable to them.

Wow thank you so much very informative i’ll make sure to apply these changes to my team.

You don’t have to, just personal suggestion, plus I’m not like super into competitive so I don’t know all that much

But one thing the reason I don’t have a ground type is that Electvire is completely immune to electric attacks.

Why is it immune? Air balloon? Because that can easily be popped.

Motor Drive negates electric attacks and raises your speed when hit by them.

Oh ok I was talking about how half your team is weak to ground types, so you might want to get another coverage for it

Got it Should I use Claydol or delta grimmer

I don’t think you absolutely need ground type pokemon, since you have a pretty good coverage offensive-wise. But you need to have a way to beat opposing ground types other than gyarados. I think if you use mega eevee and use ice beam instead of moonblast, it will work.

Oh thought you meant get a ground type my bad. The good thing is though Already got mega Evee and Ice beam so all I need to do is level It right?

Yes, but get rid of flare blitz and leaf blade and replace it with psychic and thunderbolt/foul play

i’ll probably do foul play my team is weak to ghosts. Or I could replace Rotom With Delta Budew or evolutions.