While still trying to crawl my way to the 50 win streak, I’ve encountered a few oddities:

There have been the rare instances where my opponents turn has been skipped when I’m using set up moves like swords dance, calm mind, etc.

Most recently, I had 3.0 attack and 1.5 speed on my mega salamence, but it somehow only did 1/3 of Misty’s Quagsire’s health in damage (I tried using both aerialate double edge and earthquake).

Bonus Question: Has anybody found a team that works to move up the ranks? I’ve tried rain teams, sandstorm teams, and baton pass teams, but none of them have been all that successful in getting 5 wins in a row often.

I don’t really know anything about the bugs, but can give you a team that will likely work for it: 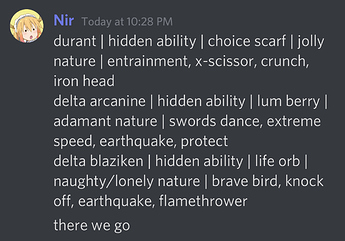 Still don’t understand the damage calcs against Quagsire, but I did just find out that it gets unaware as a hidden ability, so that makes more sense to me now. Just got unlucky I guess…

Thanks for the team and strat! Definitely clever. It took me a second to understand why truant would be beneficial on a durant haha. Never thought entrainment would be all that handy of a move!

yeah haha me neither, but it definitely does it’s job here xD. Good luck with the championship!

(also I wish I could help u with the other problems, but I’m just a casual player that does what they can to get by, so I don’t really have any idea lol. Hope this strat helps tho :))

haha I was amazed by how hard the championship is! I figured at least one of the weather wars teams would do well (and for the most part they do), usually within those 15 matches, you get thrown in with someone that totally walls your entire team. (Wallace and Drake shut down my rain team, and Elesa’s Eelektross makes it so I can’t outspeed the mega zebstrika with my baton pass team)

all of my failed attempts explain why I always have a healthy stock of IV stones at the ready haha.

Crawling along as well… i can concur, it seems like there is a counter for any team. Thankfully i havent expereicned any bugs like that. Im at rank 15 currently.

My new team ive been running is a trick room/noctem team:
Delta Amoongus with trick rock + trick room, mixed Mega Spiritomb, and phys Aegislash
Works pretty well as long as you time the trick room and spiritomb’s noctem, but it still loses to a few teams (naturally bulky teams like Roark or Bertha are able to sponge hits from spiritomb and aegislash).

Ive had the most success with this team, but yeah its still a pain to climb. Im sure my team could be improved upon; aegislash is actually not that great, I just needed a good steel type to kill fairies. i also found out air balloon aegislash fully walls Misty’s dreaded miltank.
but yeah… good luck haha I feel your pain. It will be so rewarding to eventually get that shadow mewtwo

Quagsire gets Unaware, which ignores all stat changes of the opponent

Oh wow. Turns out not even this team is perfect (although does in fact make it significantly easier). Drayden’s combo of stealth rocks and Mega Haxorus can be effective (although extreme speed can do enough damage too), and Bugsy of all people managed to beat the team too. (if Yanmega protects first turn, then it screws up the entrainment gimmick right off the bat)

oof, yeah that’s gonna make it hard to setup. I’m not rlly good w competitive, so I don’t really know how to counteract that in battle, but you can always try saving before and SRing if you fail so you don’t lose your winstreak