Welcome to the official insurgence ou viability rankings. Here we can all come together to decide which pokemon are fit for ou and where according to pokemon insurgence 1.2. Feel free to post any thoughts or opinions for each and every pokemon. These are subject to change with upcoming changes and tournaments on the battle simulator (https://battling.p-insurgence.com/)

Mega Spiritomb:
I was thinking of at least A+ rank but its power diminishes later on since its main power peak is when it mega evolves instantly gaining Noctem+Tough Claws.

These 3 have bulk, recovery and good abilities to be usable OU. Who I am kidding, they probably end up being OU.
Delta Regirock
Delta Regice
Delta Registeel

Not sure if worth mentioning but:
Snorlax (doesn’t have a rank in smogon gen6 OU, maybe I am wrong)
Delta Snorlax (Similar to Snorlax’s niche but with instant recovery)

Pretty sure there are more left (obviously), looking at you Delta Heatmor.

Delta Volcarona (Armored)- Probably too high, it’s not going to be as meta-defining as the other S ranks. It is a decent hazard setter/remover/specially bulky pivot; I think it should go to A for now.

Delta Metagross Ruin (Mega)- Should go straight to S. It has has few switch ins in OU that don’t get 2HKO’d, even when it’s Jolly. 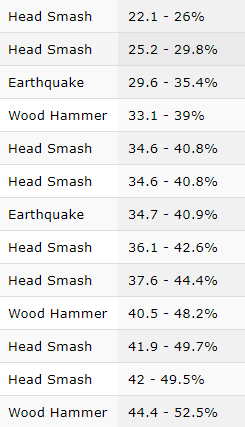 (From top to bottom: Chesnaught, Ferrothorn, Aggron-Mega, Zygarde, two variants of Bronzong, Doublade, full Def Landorus-T, Magnezone- ignore because it assumes Air Balloon and it will die to Earthquake next, Tank Garchomp, Porygon2, full Def Tangrowth, SubCoil Zygarde)
Most of these do not have recover and the last few can be 2HKO’d after Stealth Rock. This does not include Insurgence additions but I don’t remember anything that would work other than Delta Muk and Mega Jirachi.

Although its defensive typing is pretty bad, it’s still bulky enough to not get OHKO’d by a lot of things that can try to revenge it (notably lives Scarf Keldeo Secret Sword, Scarf Magnezone Flash Cannon, Band Delta Blaziken Brave Bird, and has a 50% chance to live Scarf Terrakion Close Combat). It also has a slot for Synthesis, which is actually decent given how it can force switches.

Feraligatr (Mega)- should go down a least a few ranks. It’s actually slightly weaker than normal Feraligatr. It plays similarly to the base form, although higher bulk and enough speed to outspeed a few slower Scarfers does help against a few of its previous checks. Personally, I’d say with B or so until it shows more value.

Delta Volcarona- I don’t think this is much better than Gengar. It has the advantage of having a few more coverage moves, U-Turn, resistance to Pursuit, Psychic immunity, self-healing, more bulk, and some status moves like Thunder Wave and Toxic Spikes. However, it gives up important aspects like the Speed tiers, the Normal/Fighting immunity, and the general better neutrality of Ghost STAB vs Dark STAB (ex Keldeo can switch in on predicted Dark Pulse but not Shadow Ball). Should probably go in the same ranking as Gengar, or maybe 1 higher (but I don’t really think it should).

Delta Scizor (Mega)- I’m going to say that I don’t think the huge circlejerk about it being bad is inaccurate. It’s strong but the speed and large number of weaknesses is too much. Should be C in my opinion.

Delta Bisharp- The offensive typing is pretty cool and the ability to actually absorb Defog instead of just punishing it is interesting. However, low speed and not having a good Flying move besides Acrobatics in its base form means that it can’t really be used to its full potential as an attacker. It’s not that strong without an item without boosts and with an item it’s mostly inferior to a lot of other Fighting types. I think that it should be at best B, and I think there’s a strong argument for B-.

Delta Tangrowth- I don’t think this is better than Hippowdon. Advantages are ability to use Knock Off, having Dry Skin (which I don’t think is that relevant since a lot of Water types beat it anyways), and the ability to use a few surprise moves such as Power Whip and Flamethrower. In return, it no longer checks physical Flying types like Delta Blaziken. Same rank as Hippowdon at best, in my opinion.

Delta Dugtrio- This thing is pretty bad. Fur Coat doesn’t change the fact that it’s super glassy. Hail teams aren’t very good either. It’s Attack is too low for Extreme Speed to be good. It’s outclassed as an Extreme Speed user by Delta Arcanine and as an Ice type by Mamoswine. I actually think that it can go straight to Unranked.

Currently Unranked additions:
Delta Arcanine- This isn’t on here and I think that it’s actually pretty good. It has Multiscale and Extreme Speed like Dragonite, but actually has Normal STAB and Swords Dance. It doesn’t have physical Fire coverage like Dragonite, but Flamethrower/Fire Blast work well enough to remove those Steel types after they’re weakened. Should be at least B like Dragonite, and maybe B+.

Delta Crustle- This thing is ridiculous. Many of the things that don’t die to a combination of +4 Return, Earthquake, and Knock Off is trapped by Magnezone. Knock Off isn’t super important either; HP Fire is decently strong at +4 and can pick off Ferrothorn and PhysDef Skarmory. The only things holding it back are that it can be picked off by priority and that it’s hard for it to find any super free setup opportunities. The only viable thing that can outspeed it outside of priority is Jolly Excadrill in sand (and it can outspeed even that if it runs Jolly itself, although I think that’s pretty bad). The Simple ability does mean that Intimidate drops its attack by 2 stages, but it’s still decently strong after that. There are some things like TWave Slowbro, PhysDef Tangrowth, Hippowdon that can live one hit and stop the sweep, but they have to be pretty healthy to do so. I think that it deserves at least A+.

Delta Volcarona (Armored) - I agree with this being too high up. It lacks the speed to sweep, lacks the power to wall break, and lacks the moves to set up albeit it can do most of those, just not at a S rank level.

Delta Lopunny (Mega) - I think this should be in a lower rank than M.Lopunny. Its stab is resisted by some pokemon in OU, notably M.Slowbro who resists both and almost walls it completely (bar U-turn and Knock Off/Sucker Punch, which have either low bp or a risk of not hitting). It also does not have access to STAB Fake Out, a small niche that M.Lopunny has. M.D.Lopunny also has a harder time looking for good switch in opportunities as it has 2 resistances, no immunities and mediocre bulk.

Delta Typhlosion (Mega) - Although it does require a weather team, a s.atk stat of 240 almost rivals M.Mawile’s atk stat which allows it to hit hard without any boosting moves. Although it does not have the best coverage with its stab moves, Hidden Power can make up for the lack of coverage (HP Fire can 2HKO Ferrothorn, Magnezone, Excadrill and has a chance of a OHKO after SR). It is further limited by its weakness to common attacking types and a 4x weakness to ground plus the inability to hold a balloon. Its base 109 spd is decent as it allows it to out speed Keldeo without scarf. Overall I think it does a similar job to Heracross, with more power and better speed, but requiring weather and less coverage options.

I feel like Delta Emolga deserves a mention but with low stats across the board, might be hard to utilize fully.

Delta Registeel is the only non-mega pokemon capable of setting up Fire SR which limits a lot of pokemons ability to switch in freely, a key one being ferrothorn. Definitely should be OU.