I always was a little bummed suicune wasn’t an ice type like articuno, which motivated me to make this legendary design. 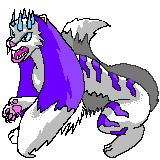 Pokedex: Ancient carvings suggest this pokemon was once revered, but it is though it worshipers grew angry with it as a struggle is depicted, afterward a new pokemon appears in its place. It is believed exstinct.

This pokemon is revived from a fossil, it flees leaving the scientists’ lab a mess in its panic fearing humans.
My feeling is this pokemon was once worshiped, but in time the humans outgrew him as a god seeing offerings and sacrifices as archaic. With lost advanced technology they created its replacement that causes its extinction.

this just looks like a fakemon… in my opinion there is no resemblance to suicune.

I do like the design, but like @potatoking12 said, it doesn’t look at all like suicune. Oh, I would also maybe change the pink in the design. Looks a bit out of place. But other than that, it looks pretty cool.

Its not supposed to be suicune, it was just my own design created because I wanted another ice legendary like articuno. Since suicune wasn’t an ice type, I made another legendary beasof my own.

Its not suicune, its an ice legendary all its own. I created it because I was hoping suicune was going to be an ice type,but it wasn’t. So in the spirit of the legendary beasts I created an ice type beast. It is a fakemon.

This post shouldn’t be made here at “Holon Uni” since it is for Deltas, but rather at the “Artwork” subcategory, “Fanmade” main category, or “General Art” category.

You know you can recategorize posts right Aboo?

Right, it seems I forgot about that haha
Thanks for the reminder.

Oh okay, I was unsure on that. Thanks for clarifying.