So… it’s been like a month or something since I posted deltas. Though I guess I did post that thing with the sprite edits… eh, whatever. Thinking hurts the ol’ noggin. Now I know I said I’d do a gen 7 and 8 post, but uh… my… dog ate my homework. Or something. So that’s been pushed back. Definitely didn’t just forget about that promise until halfway through this post.

So, as a sidenote, a while back I got WAY addicted to a YouTube channel called “AntsCanada”. It’s this dude who has a bunch of ant colonies that he takes care of, and it’s pretty interesting. I stopped watching his videos after a while cuz I moved onto a different fixation, but it’s still a quality rabbithole to go down.

I say this because ANTS. Specifically, Ant Pokemon (Not Durant). δAxew, the Ant Pokemon, starts off the line. It’s a pure Bug type with the ability Swarm and the hidden ability Intimidate. δAxew, despite having wings, cannot yet fly. It does not care, since the needs of the Swarm come first. 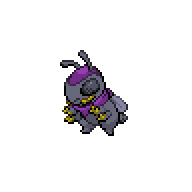 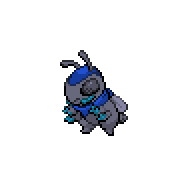 And at level…38? Really? Yeesh, Unova. At Level 38 it evolves into δFraxure, also pure Bug, also the Ant Pokemon. Same abilities, Swarm and Intim. δFraxure, much like δAxew before it, cannot fly. It can, however, use its wings to increase its ground speed, boosting production speeds to the limit. 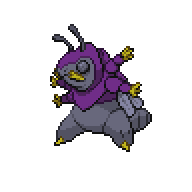 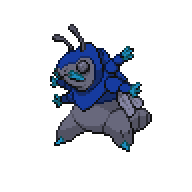 Level 48, it’s δHaxorus. Bug, Ant Pokemon, Swarm/Intim, yadda yadda. I did this sprite first, cuz I thought Haxorus really did already look like an insect. I mean, segmented exoskeleton, skinny arms, mandibles. Honestly, I mostly added the wings cuz I thought I didn’t change enough. Anyway… δHaxorus can finally use its wings to fly in the sky, but… it much prefers to use its wings as it did as a Fraxure, to gain extra land speed. 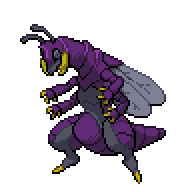 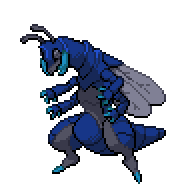 And now, the other stuff! And yes, I AM switching the formatting on you. Enjoy your images above your text. 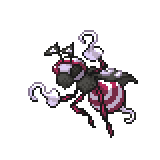 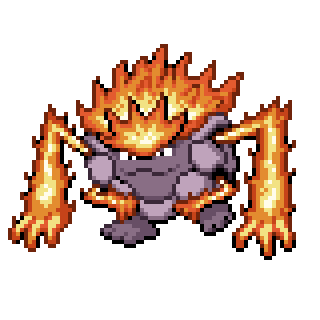 δBeedrill, the Pirate Pokemon. A Water/Steel type, none really know for sure how it flies, though its pirate flag cape flapping in the wind behind it and the strong smell of seawater around it don’t make it any easier.
Then there’s δGraveler, a Fire/Psychic type known as the Fire Hand Pokemon. This one came about when I picked 3 random abilities and tried to fit them all into a design. I got Telepathy, Contrary, and Shell Armour. I may have to return to this method in the future, though that really depends on whether or not I run out of ideas ever. 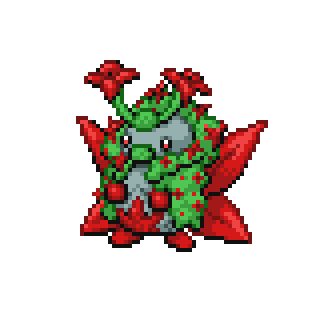 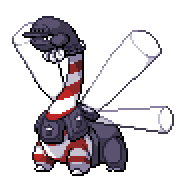 δKricketot, the Azalea Pokemon. Pure Grass, it has the ability Serene Grace, with a hidden ability of Rattled. It spends most of its time sleeping in flowering bushes, soaking up the mottled sunlight that peeks through. When awoken, its first instinct is to flee, for it is a born coward.
δTropius… again. It’s my favourite pokemon, don’t judge me. Anyway, it’s a Ground/Electric type with the Ability Illuminate. Only Illuminate. I said it was my favourite, not that I had to make it GOOD. But, for the sake of argument, and because I want to, its Hidden Ability is now… Huge Power. Anyway, it - much like its non-genetically manipulated counterpart - is a big softie. It lives by the shore, shining its guiding lights even in the toughest weather. For this reason, it is known as the Beacon Pokemon. 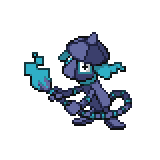 That’s all for now, but I guarantee, the next post WILL be gen 7 and 8 mons. Probably. It’s very likely. Maybe. Anyway, as always feel free to hit me up on the Discord, and don’t be afraid to give making your own deltas a shot!

yeah but it looks cool though, right?

Yeah love its eyes and wings