Im just wondering if you were going to add gen 7 to the upcoming update or the game at all.

gen 7 pokemon won’t be added at all. the only feature from the games that will be available is the trainer detection feature 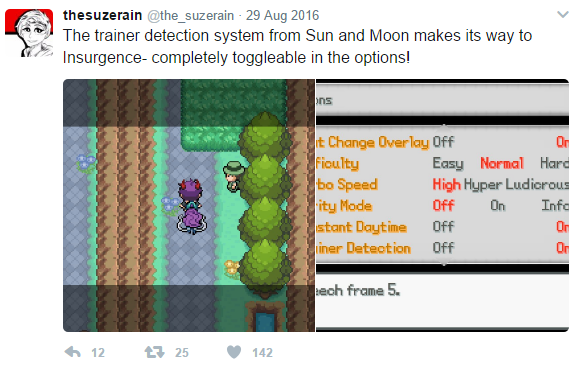 it would take too much time and it would be difficult to find places for the pokemon to go when we already have so many. the complete insurgence dex has at least 800 species (cant remember the actual number lol)

i understand its already taking them long for the next update ._. but it is worth the wait this has to be one of the best pokemon games out there

This page lists fangames that have been made with the Essentials kit. Only completed games and games with released demos are listed. By default, games are listed by the release date of their latest version. This list may be incomplete or out of date.

take a look at this. i don’t want to pick favorites personally but if you like grinding for hours on end and emo characters pokemon reborn is the game for you Your description of reborn is extremely accurate. Though I think the childish edginess is pretty accurate and easy to relate to for young people now hahaha

Thanks for indicating that my insurgence adventures are not over! So can I continue EV training my team in hopes of meeting the torren champion?

Another little request could we have memory link battles against lvl 50 or lvl 100 pokemon? Also, add the cult leaders and taen in the list after beating the champion please, that would be epic.

Why are you asking flygonite about adding things to the game? Flygonite’s not the one who adds them

ehe i’m not a dev. i can’t control that stuff

No problem bro, I was just relieved to know that insurgence is not yet over.

Also im new here, so i replied to flygonite rather than replying to the discussion thread by mistake.