Character Name: Nil
This is a fake name used to help conceal their past, but it’s the only name they’ve ever given out.

Character Description:
Nil is an agender character with medium length blonde hair tied back into a ponytail that sometimes drapes loosely over their shoulder, sporting a large blue ahoge, and has incredibly observant blue eyes hidden under a pair of glasses. They wear a long white jacket over a navy blue turtleneck, and dark black jeans held up by a blue belt.

Nil has a strong physical resemblance to Unova’s Colress, and it is suspected that the two are relatives. However, due to the lack of information of Nil’s past before Torren, there isn’t much other evidence to backup the claim.

Nil has worked as an information broker in Torren for years. They’ve had customers within many cults in the Torren, and is believed to have also been patroned by even Adam in his years of disbanding cults as Augur. Though neither would likely admit to it if asked.

Because of this, Nil knows just about everything there is to know about the regions underground, and knows the dirty secrets of a lot of powerful figures in the Torren region. Secrets that they would happily share with anyone wanting to know… for the right price that is…

Nil’s most prominent interactions have been with Perfection. The cult has common need of information regarding people of interest in researching anything capable of making Pokemon stronger, as well of information regarding legendary Pokemon. Nil was the one who gave Taen leads find the locations of Kyurem, Reshriam, and Zekrom. As well as selling Colress’s notes on the strength of Pokemon, and all of the information team Plasma had on Kyurem and the original dragon. Nil never specified how they came upon all this information.

Though Nil can be rather unpredictable when it comes to their actions. They enjoy the chaos of seeing what happens when powerful personalities collide. They its amusing to see the proudest most arrogant people crumble on their own weight from having their plans and everything they’ve dedicated their life to foil and fail. So occasional anonymous tips to the Augur of a cult just on the cusp of bringing a legendary Pokemon under their control, or a casual warning that Adam was hot on the trail of the actions of a cult leader, weren’t uncommon. Nil enjoyed quietly playing both sides of the board like this for years, and was quite good at stirring up drama or delaying it for peak tension. All for their own amusement.

But with the end of the cults, came an end to easy business. Nil could have followed the Perfection Cult out of the region, or leave to find greener drama pastures elsewhere. However, it was the new battle frontier that caught their attention.

Almost on a whim, they applied to become a frontier brain. Interestingly, they were accepted for a position in the Battle Factory, as Nil is surprisingly good as a battler.

At the Frontier, Nil continues to show of their remarkable observation and information gathering skills. Knowing quite a lot about the other Frontier Brains in only the short about of time they they’ve worked together. As well as being able to practically read challengers thoughts and actions after observing their previous battles and analyzing their fighting style to find their weaknesses and habits.

When the player challenges Nil, they will comment something along the lines of. “Oh it’s you! The regions little savior who knew nothing of their past. If only you’d come to me, I could have saved you a lot of time in discovering your true identity… That is if you payed well enough.” Or something similarly smug and full of “I know more about you than you know of yourself” tones.

After the battle, they can comment on how they’re annoyed that the player got rid of the remaining cults. both as a loss of business, and as a loss of entertainment.

Pokémon on Team:
Nil has a fondness for genderless Pokemon, and at least half of their team is made up of genderless Pokemon, but their closest partner will always be Rotom. A Pokemon that they love and thinks is adorable, and if Alola is a thing in the Insurgence canon, Nil wants a Rotom Dex so badly.
They also use a lot pokemon, and deltas of pokemon, from Unova. 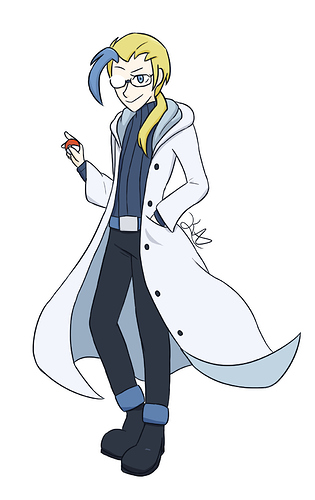