Character Description: Faryn is a being hailing from the Distortion Realm of Giratina. She served in the court of Nyx since birth. Relatively early in her life, she was sucked through a portal in a freak accident involving Giratina into the world created by Arceus, not giving the Distortion Realm enough time to corrupt her body like the others of her race. Because of this, she appears human, but as an orphan with absolutely no legacy to support her, she was shunned wherever she went. She became a creature of the shadows, hidden from human sight, and familiarizing herself with the Pokemon of the night. She spent her entire childhood and adolescence training in secret, leaving herself hidden from public view until she turned 18, where she challenged and defeated the Elite 4 with ease, and went on to overthrow one of the Frontier Brains and take a seat of her own. She still hopes to return to the Distortion Realm one day and liberate her people, training both herself and her Pokemon until she feels she is worthy to battle Giratina.

Battle Frontier Facility Style (of the 4 choices listed on rules.): Pyramid or Arena 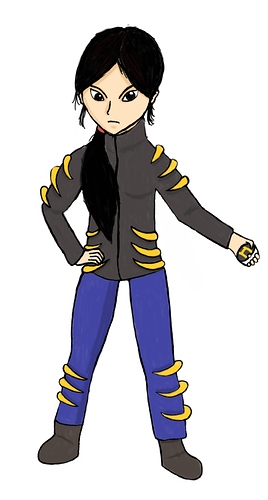