Character Description:
An outcast once used to be part of a royal family ruling a island nearby the Torren Region.
In their tradition, once a member of the family reaches the age of 10 they get partnered with a Delta Litwick.

Dereli has a beige skin tone, violet-silver long ponytail hair, and light blue eye color, he got a sturdy average build with a height of 190 cm.
His wear is a Royalty outfit, their color based on the Luxury Ball, which are black, silver, gold, and crimson.

He is the eldest son of the royal family at an age of 35, he is so kind, lovable, and talented that the young were jealous of him. Being overwhelmed with envy at a later point they planned on getting him thrown out of the island, which was the start of his outcast.
His long life partner Clara (Shiny Delta Chandelure at this point) refused to leave his side and set off with him on his forsaken adventure.

Along their journey, they went through many trails and hurdles, sad and good times, but that didn’t stop their relation with each other to grew even stronger, in fact they made friends with other Pokemon along the way.
In the vast sea heading away from the island, their first encounter was a Delta Snivy on some small isles, she was lost and separated from her colony, Clara approached the young one embracing her like she used to do with the little Delta Litwicks. Some time later, Delta Snivy grew attached to Clara like her own mother. Dereli named her Nadja when saw hope in her eyes.

Setting ashore on the Torren Region, they met two prankster Pokemon Phanpy and Timburr (shiny), they were mischievous and caused some harm to Dereli and his party along their way from pitfalls, rock slides, and other traps, showing off their skill in building and digging, while at the same time it was a fun challenge for Dereli to pass, which formed an unusual bond with them. At some point later, they got caught up with Pokemon Hunters while setting up some traps, Dereli intervened but it was mostly Phanpy’s agility and Timburr’s sharpness that got them through the tight incident, after that was over they laughed it off together and both of them joined the group. Dereli named Phanpy Skeeter, and Timburr Keenan after their own skills.

While wandering around the region, Dereli and his party ended up in Roggan Town, the starting point of which he gained interest in the Battle Frontier, he challenged many trainers in there but his current efforts were not enough with his current team strength. He overheard some foreign trainers mentioning a place called No Man’s Land being a barren area with harsh wilderness that you barely see anyone in there, so he set up his mind on training there.

Training in No Man’s Land, he met a Weavile, she was tough and hardworking, training always by a giant rock honing her skills. Seeing Dereli and his party training around the area, peeked Weavile’s attention, the area was like her own territory and no one is allowed to be here as long as she is around, so she tended to duel them occasionally on sight. She had the winning streak always, but Dereli never gave up on kept on training and dueling Weavile, it was like the perfect set up for him and his party having a strong Pokemon out there for a practice. Their bond grew through those many battles to the point Weavile ended up coaching them, and at a later time joining the team. Dereli named her Madeline.

On their way back to Roggan Town, on a stormy night full of thunder and lightning, Dereli and his party met the legendary Pokemon Thundurus, it was their destined encounter to test themselves, their hard work and tough training paid off, they managed to fight in par with the legenedary Pokemon Thundurus and gave him some rough time battling, Dereli ended up catching him, and then named him Tempest.

Back at the Battle Frontier, Dereli challenged the Battle Pyramid and ended being the Brain of that facility. 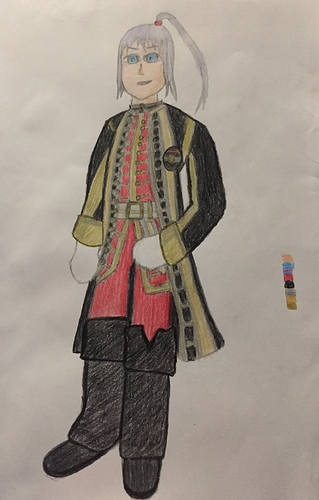 Liking the idea of the royalty, nice job!

Thanks ^^
Added some art reference as well.