Character Description: Chloe was always fascinated by stories and cultures of old. When she was little, she always loved to play pretend, and imagine that she was characters in stories. She was also a talented battler as well, and she probably cared for her Pokemon more than she cared about her friends. As she grew older, she took up the habit of cosplaying, and she would always bring her partner Pokemon along with her to the conventions. She was approached by the Torren Battle Frontier to head the Battle Pyramid, and she jumped at the chance to do it. She now constantly wears an outfit reminiscent of an ancient culture, and battles the people who are strong enough to make it through the entirety of the Battle Pyramid. Of course, she does all of this while in character, preferring the persona she had created as Frontier Brain of the Battle Frontier over the dullness of real life. 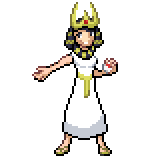