Character Description:
Brooke is a twenty four year old woman with dark skin, brown eyes, and black hair which she keeps in a bun. She stands at an average height of 5 feet and 3 inches (~1.6 meters). Her outfit is mostly inspired from her ace Pokémon, Talonflame. The main eye catcher is her black and red coat with flame patterns along the bottom of the coat and her orange tinted visor which also act as glasses. Beneath her coat Brooke wears a an egg themed necklace and a casual tan t-shirt that gets stuffed down past her silver and gold colored belt. At her wrists Brooke wears two sporty wristbands with one of them containing a keystone used for Mega Evolution. Moving lower down her body Brooke wears some baggy navy blue pants that are pushed down into her yellow trimmed brown hiking boots.

If someone were to meet Brooke for the first time they might say that she’s a little out there, but if they were to meet her for a second time they’d know how crazy she is about what she does. Brooke is the embodiment of passion as she takes part in her interests without giving much thought to the people around her, which most of the time means ignoring them while she’s hard at work. This causes people to misjudge Brooke’s intentions, but she doesn’t mind it. Even when Brooke receives criticisms from unknowing trainers in public about her behavior she shrugs it off, because they don’t know a single thing about what she loves. Her biggest passions are breeding Pokémon, raising Pokémon, and Pokémon battling. She uses all three of her passions as inspiration for her goal to see as many battles with as many different Pokémon as possible within the Batlte Factory. Many Pokémon she breeds and raises end up getting used by trainers in the facility, and she sometimes even gives out some of her Pokémon to young trainers she thinks that are deserving of a companion. When it comes to talking about any of Brooke’s interests she will talk about them to no end, which is why she loves her work at the Battle Factory.

Pokémon on Team:
A few routes could be taken with this. Either her team would be like the Battle Factories from the original games where the team is completely random, a custom team would be used for her battles, or the devs could make the teams themselves with or without the Talonflame ace. I’m completely fine with either option, so I’ll post some custom team ideas to go with this following the previous Battle Factory formats (somewhat). 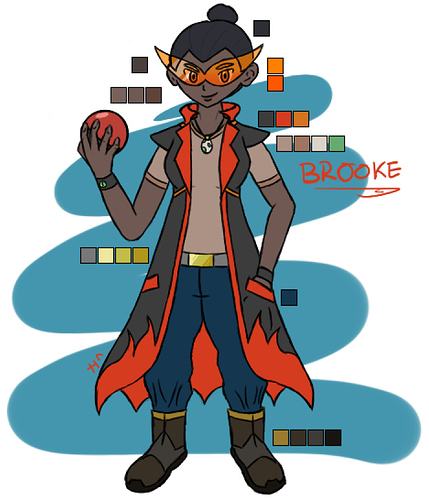