Character Description: Aaron Steele is a man in his late 30s and is about 6 feet tall. He has very messy silver hair and also has a very carefree attitude in his daily life but when a battle starts or when it involves his work in general he becomes more serious but will usually let out a quip or two. He got the job as a Frontier Brain in Torren after taking on an evil group and resigning from champion in a region far away. His most important tool is his robotic arm developed and created by his sister. Not only does it hold his keystone for Mega Evolving his partner pokemon he also uses it as a snag machine though that function is no longer useful to him anymore. Because of it being a snag machine he has a disc on the side of his face that slides out into a visor. Since it doesn’t really need to be used to detect shadow pokemon he just wears it to look cool now. He wears a dark grey dress shirt with a red tie, generic jeans, and black dress shoes. If he wants to hide the robot arm he’ll wear a super dirty jacket because of all the times he throws it off for dramatic reveals of his arm.

Art/Design Examples (If any): Here is an Overworld sprite I did for him 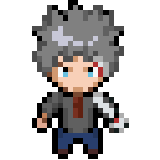 thanks for the submission!