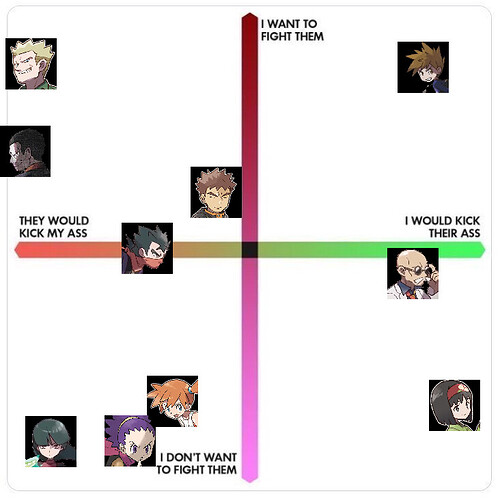 Ok, hear me out on this:
Surge is a flippin’ former soldier and the dude’s jacked, he would wipe the floor with me. Giovanni maybe isn’t that big but… I mean, he could pay someone to absolutely deck me… but they’re both kinda a-holes so I’d love to punch them in the face. Brock it’s def more fit than me but I think I would have some chances. Blaine’s a nerd. Koga isn’t that big but I would never want to fight a ninja (same goes for Janine).
Sabrina would absolutely reck me with psychic powers.
Blue is just all hat and no cattle.

I’m thinking of adding more gym leaders to the mix, this is fun (for me lol)

my only question is why?

The same thing that motivates most of my dumb choices: boredom.