So, there is nothing wrong with the base game sprite but sometimes I just want to be a pretty girl. So I re-did all of the art assets and I present you with a more feminine version of sprites for the female character.
Features include:

Look at these pretty pictures! 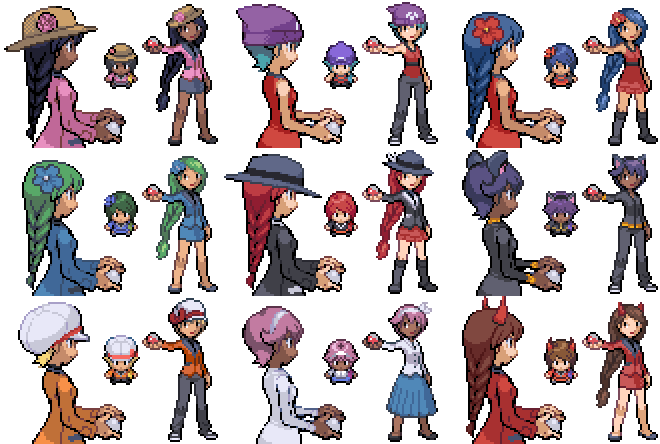 Great. Love the stuff, would love to potentially include it in a future update if you’re okay with that. Got any things for male outfits you’d like to have? Because we’re dying for more unique clothing options. We told everyone that clothing was 100% based on fan submissions and almost no one did so, stuff like this helps a ton.

Sure, go right ahead! Beware though that the clothes do not line up at all with the base game sprites as I made them from scratch so I don’t know how you how you would use them. If you would like to use them instead of the base spites, I could, however, port the things I haven’t done for this mod like the lords armor or, crowns or alt jumpsuits. I didn’t do them because I wanted mainly skirts lol. I have not worked on any male sprites yet but I thought about making a male version of the mod for people to use with less flowers and skirts.

If you by chance have a discord, I would love to talk to you about the idea more!

I’m sorry if this is stupid but how do I add these to the game?

This is beautifully designed, but unfortunately the download link is not working for me. I even downloaded the extension suggested by the MEGA site and, while the page loaded a little more, it did not go all the way. Is there anyway you could put the files on another site?

Edit: If anybody else is having this problem, the solution on this YouTube video worked for me: https://www.youtube.com/watch?v=fYyEedhqpHU

Edit 2: Awesome, got it all up and it’s working great! Thanks a ton, it’s beautiful!

This looks great! Can’t wait for the male version
Assuming you haven’t already made it and it’s just in another post somewhere

How do you install the female character overhaul.

How do you install the female character overhaul?

hey, I absolutely love this mod, but Im having a problem and wondering if you could help? so its not big. its just that for some reason the lords shirt sprite is showing up as the other jumpsuit sprite until I run. what is causing this?

hey, I absolutely love this mod, but Im having a problem and wondering if you could help? so its not big. its just that for some reason the lords shirt sprite is showing up as the other jumpsuit sprite until I run. what is causing this? could you help me understand?

to answer anyone who finds this comments question, I fixed it. the modder swapped the numbers by accident. the white shirt is set as shirt900 and the red is shirt902. Its an easy fix, before pasting them into the files rename shirt900 = shirt902 and shirt902 = shirt900
after that paste them in the game files. and that solves the white shirt running animation
do not put them in the game folder and than rename them …
trust me it wont work

As someone who is terrible with computers and was still able to implement these into my game, follow these steps:
•if anything goes wrong, I would make a copy of your core folder just in case. But you should honestly be fine
•after downloading and extracting the file, drag the graphics folder from the overhaul to the graphics file in the core folder. This will merge the two folders
•when you are prompted to replace files with the same name, replace them
•start up your game with this beautiful overhaul

hey, idk what’s going on with the file but when i download it from mega its saying there is no content? any idea if the file might have been corrupted? or does anyone have a spare file for it?