Greetings, I apologize for bothering. I hope this is a proper place for it but feel free to point me somewhere else if its suitable.

I had downloaded the game just today but an error already prevented me from playing, oof- The opening menu loads normally with music and proper options but attempting to start a new game will result in this message. 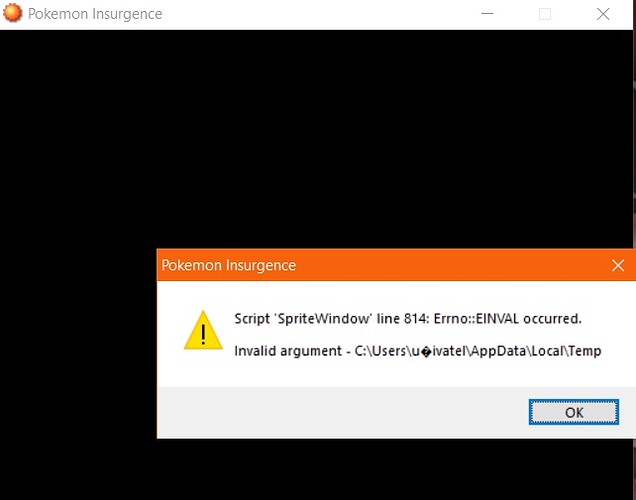 I had re-dowloaded the game (both normal and from mirror), attempted to load it both still from its ZIP and extracted in an honorary folder of its own, even emptied the “Temp” folder, but nothing so far has helped and I didn’t had luck in finding an answer to this problem in these forums so far.

Before pointing out the missing symbol in the path there, I assure you that’s most likely not it- This is “User” in my native language and all programs and games so far have recognized it for what it is and acted without an issue. Renaming it is propably not an option, as I fear it would break everything which already has this path established.

If it’s any help, I am also playing Pokemon Reborn and Desolation on this notebook without any error.

I would appreciate anything that could point me in the right direction, thank you for reading!

Thank you for your response- I am no Dev eighter and my English is subpar if were talking technicals, so any insight is appreciated and you are very kind for lending a hand.

I am downloading from the official site and I imagine if the game had missing graphics, that would be experienced widely and patched within minutes, but its worth checking out still.

I checked the Graphics folders: In battlers, characters and icons, the number 184 is referring to Kabuto and I have all the necessary sprites, normal and shiny both. So I think we’re okay in this regard!

I am however missing a huge number of files in “Transitions” as the files seem to skip numbers and don’t go 1-2-3… For example, VsTrainers skips from 3 all the way to 83, skipping over 184 entirely, so if you could check if its like that in your files, I would be really grateful.

I do not know where to find the scripts, unfortunately.

Will continue tinkering with this and perhaps even ask the community on Reddit if they could shed some light on this. I am not the only one who experienced this problem but I havent found anyone mentioning a defined fix, so I will post it here if I manage to stumble upon some progress!

Well the only way to fix scripts is to redownload the game, or hack it (I wouldn’t recommend the second one). Also, I’m pretty sure it’s a script error; there’s an error in script line 814, and I don’t know how to fix that.
But there is another thing I’m wondering; are you downloading the full game, or are you accidentally downloading the patch only? Either way, try downloading a previous version of the game and see if that does anything.