Hey guys, 1BadGTO here with something I’ve done in the span of an hour with Microsoft Paint and junk, contemplating life and I’ve been thinking to myself “Insurgence has this new moon thing going on, which could be useful and junk” then thinking about Ninetales’s line and how it has been outclassed in the drought casting games by Charizard Y (Frail as crap compared to ninetales who can be quite bulky and live enough to set up more droughts) and how Insurgence included a mega Delta Charizard that is essencially that, but no Delta Ninetales to make the new moon game a bit easier. I’m not intending on having these things actually being a thing (Honestly I spent more time on the ninetales thing, this is just concept art) and this is for fun anyways, so heres the monstrosities: 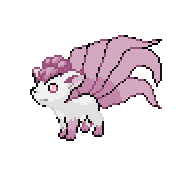 Delta Vulpix: Dark (what I intended the evolution to be but… eh, whatever) Ghost or even fairy as a typing.

The main inspiration was the actual line’s ability to cast sun instantly and how theres a new moon so obviously it would have Mega Delta Charizard’s ability as a hidden ability. For the regular ability I guess it could be a new ability that acts as flash fire, but activates when hit by a dark type (or ghost, or fairy depending on how you see the type of its line) attack instead of a fire type attack (I know there are abilities similar to that but not with the same concept, I just don’t think justified or rattled would suite this delta species very well).

Now to the main event: 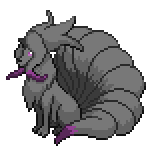 Like the sprite, don’t hate because I was locked in a basement for 20 years creating these things ;-;… oh wait, wrong backstory. Anyways it may seem like a cool looking recoloration of a ninetales but you have to admit, the concept of a delta ninetales that can cast New Moon while the regular Ninetales can cast the sun, is kinda wild. Anyways same as the little delta vulpix thingy, the Hidden Ability should be Mega Delta Charizard’s ability (I keep forgetting the name, I’m more of a Delta Venusaur kind of guy) while the regular ability should be the dark absorbsion ability (guess it could be called Blind Dark or Spectral Absorbsion), basically mirroring the regular Vulpix Line.

Any feedback is nice but I’m more intrested in the oppinions of the concept (and who knows, maybe its already been put out there, but with better sprites than mine) rather in how I did with the wierd sprites. I just wanted to throw the concept out there if it wasn’t already.

also I am new to this whole posting buisness and I may have messed something up, sorry if it happened.

I don’t see any change on them except the tail on Vulpix and hair on Ninetales, would call them recolors.
You might want to add features of something along the typing(s) you want to use.